The company said that the 160m HDL-13000 MRSS, a model of which was on display at DSA 2022 in Kuala Lumpur, would serve as the main platform for the force’s logistics support, as well as humanitarian and disaster relief (HADR) operations.

The 13,000t vessel features an enclosed vehicle deck that runs from bow to stern and can carry 16 or more main battle tanks and six multirole armoured vehicles. According to HHI, the after portion of this area also serves as a well deck. A side port ramp and a stern gate provide access to the vehicle deck. The ship has sufficient ballast tank capacity to flood the well deck to accommodate landing craft that can be used to transfer personnel, vehicles, and/or cargo to and from the shore, noted the company.

HHI’s announcement comes after RMN Chief Adm Reza Sani confirmed in January 2021 the RMN’s plans to acquire the MRSS under the ‘Twelfth Malaysia Plan,’ which runs until 2025. In its White Paper, the Malaysian defence ministry revealed the military will formally establish an amphibious force that will use the MRSS.

Meanwhile, HHI noted it is proposing a 91m design to meet the navy’s LMS ‘Batch-II’ requirement. The company said the 2,200t ship will incorporate stealth characteristics to reduce its radar cross-section and infrared signature. Powered by a CODAD propulsion system, the vessel is expected to have a top speed of 28kt, and a range of about 3,000nmi at its 14kt cruising speed. The ship will have a flight deck and a hangar for a mid-sized helicopter, and will also be capable of deploying surface-to-surface and point defence missiles for air defence, said HHI. Two RHIBs are to be embarked on each side of the ship.

The first batch of four LMS for the RMN was built in China. These vessels, however, were built based on different requirements. For the second batch, the RMN is currently looking for LMS 85-100m in length, with a beam of 11-14m, a top speed of 28kt and a cruising speed of 14. They are to be armed with a 57mm gun, a 30mm CIWS, two Naval Strike Missile launchers, and SAM and/or point-defence missile systems.

Besides HHI, other firms known to be competing for Malaysia’s LMS ‘Batch II’ programme are Germany’s NVL and Dutch shipbuilder Damen.

Both the LMS and MRSS procurement plans are part of the RMN’s ‘15-to-5 Fleet Transformation Programme,’ which aims to reduce the number of in-service vessel types from 15 to five, in order to increase efficiency, boost platform readiness, reduce operational and maintenance costs, and establish more commonality across the fleet. 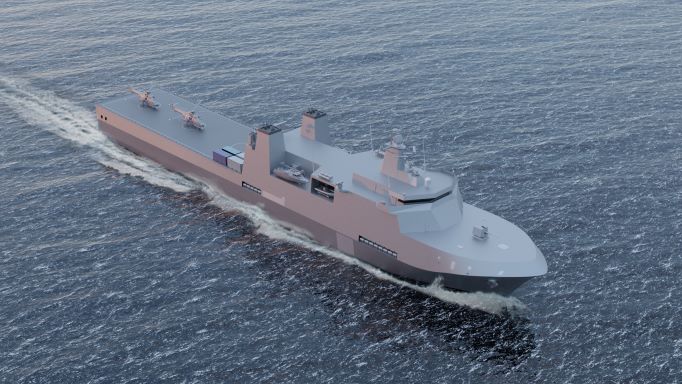