Hyundai Heavy Industries (HHI)  has laid the keel of the first of six FFX-III multi-mission frigates for the Republic of Korea Navy (RoKN). The Defense Acquisition Program Administration (DAPA) announced on 25 April that the event took place the shipbuilder’s facilities in Ulsan, adding that this was the first of a total of 63 modules to be brought together in the construction process.

HHI announced in March 2020 that it had secured a KRW400 billion ($316 million) contract to design and build the first of these 3,000t vessels, each powered by Rolls-Royce MT30 marine gas turbines, as are the FFX-II Daegu-class warships.

A contract for the second frigate was awarded in January 2022 to Samkang M&T. The first two of these 129m, 30kt vessels, featuring a complement of around 120 personnel, are scheduled for delivery in 2024 and 2026.

The warships will feature improved detection capabilities for ASW and air defence, provided by an integrated mast mounting a four-sided, fixed, multifunction, phased array radar capable of 360° coverage to simultaneously track and detect multiple potential threats. They will also be capable of using their electric propulsion systems during ASW operations to minimise their acoustic signatures, switching to gas turbine propulsion when high speed operations are required.

Armament will include a Mark 45 5in main gun, anti-ship missiles, and a new CIWS being developed by LIG Nex1 and expected to be ready for deployment by 2027. This will feature a 30mm Gatling-type gun capable of 4,200rpm, an electro-optical targeting system, an AESA tracking radar, and a non-rotating, four-faced AESA search radar. 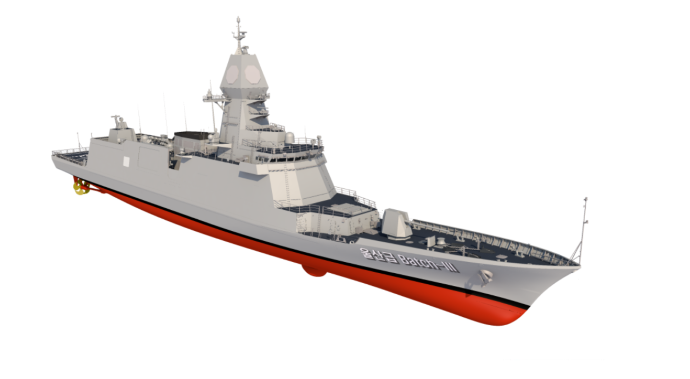 A rendering of the FFX-III design. (DAPA)