HENSOLDT has been awarded a contract, valued at some €200 million, by Airbus Defence & Space, to develop and deliver new radars and core electronics components for the 38 German Air Force ‘Quadriga’ TYPHOON aircraft. Work under the contract will be conducted by HENSOLDT at Ulm and partner Indra in Spain. The new radar is based on AESA technology, allowing several tasks to be performed simultaneously, rather than in sequences as is required in more traditional systems.

“The high pace of development in the field of electronics and, above all, digitalisation, constantly gives rise to new applications. With this contract, the Eurofighter will benefit in the future from a primary sensor that is technologically top-class, and will improve the aircraft’s survivability in even high-intensity conflicts,” commented HENSOLDT CEO, Thomas Müller. “The fact that the radar will be produced by a European consortium led by HENSOLDT, with Indra operating as main partner, shows that there is good cooperation in Europe on joint armament programmes.”

HENSOLDT was already involved in development and production of sensor systems currently used in Eurofighter aircraft. At present, the company has a workforce of 2,500 people at its main production site in Ulm and is planning to hire 300 new employees across the Group this year. It is also investing €30 million in building an RF technology development centre in Ulm, among other things. In addition to electronic components for the new Eurofighter radar, AI-based sensors for a wide range of applications will also be developed there. 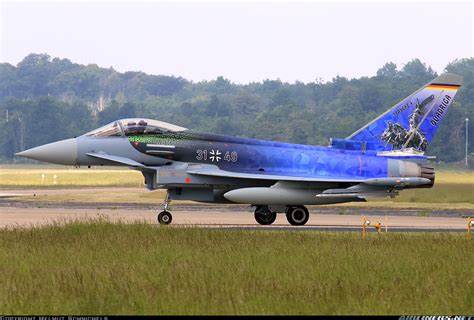 The Tranche 4 ‘Quadriga’ variant of the Eurofighter TYPHOON will benefit from the enhanced protection of a new AESA radar. (Photo: Mönch archive)