Analysis – Bolstering the Defences of the Aloha State

Despite the outward appearance of relative bonhomie between US President Donald Trump and his Democratic People’s Republic of Korea (DPRK) counterpart Kim Jong Un during their June summit meeting in Singapore, it seems to be ‘business as usual’ for the DPRK’s nuclear weapons and ballistic missile programmes. The bilateral meeting saw the signature of a joint statement reaffirming the so-called Panmunjom Declaration of 27 April. Signed by Mr. Kim and the Republic of Korea’s (ROK) President Moon Jae-in this underscored the wish of both countries to see the complete denuclearisation of the Korean Peninsula.

Fast forward to early August: A report delivered to the United Nations (UN) Security Council drafted by a panel of experts monitoring UN sanctions regime against the DPRK imposed as a result of its weapons of mass destruction machinations said that the latter, “has not stopped,” its efforts in this regard. For all intents and purposes the DPRK’s ballistic missiles remain a threat to the Western Seaboard of the Continental United States, as much as to US allies in Asia such as Japan, the ROK and Taiwan.

The Hermit Kingdom’s continuing ballistic missile programme means that it is unlikely the US will reduce its Ballistic Missile Defence efforts any time soon. Little surprise that in March the US Missile Defense Agency (MDA), responsible for leading and coordinating the country’s BMD initiatives, was awarded a U$11.5 billion budget; a significant $3.3 billion increase on its 2017 allocation. Some of this money will be directed towards the purchase of new BMD radars for the detection and tracking of ballistic missiles launched from the DPRK. In late June, the MDA announced that $1 billion would be spent on buying a new BMD radar for Hawaii.

A paper published in February 2017 by the Missile Defence Advocacy Alliance (MDAA), a BMD pressure group based in Alexandria, VA/USA detailed the missile threat to Hawaii. The paper explained that the DPRK and Hawaii are separated by 3,870 nautical miles/nm (7,167 kilometres/km) translating into a 20 minutes’ missile flight time. Hawaii is protected by the US Army/US Air Force’s Boeing Ground-based Midcourse Defence (GMD) BMD system. The GMD initiative spans two sties; Fort Greely in central Alaska and Vandenburg airbase in southern California. Each of these facilities hosts several Northrop Grumman Ground-Based Interceptor Surface-to-Air Missiles (SAMs); each of which is equipped with Raytheon’s Exoatmospheric Kill Vehicle (EKV). The EKV kills warheads by sheer kinetic force during the ballistic missile’s ‘mid-course’ phase when it has reached space and its motors extinguished.

Yet Hawaii’s location poses a challenge for the GMD ensemble. The archipelago sits 2,121nm (3,928km) southwest off the coast of California. As the MDAA paper continues this means that the GMD has, “only (a) one shot opportunity to defend Hawaii because distances are too far to allow for second and third shot opportunities from the 37 (GMD SAMs) based in California and Alaska,” adding that “multiple shots from interceptors are required to defeat one (DPRK) long-range missile.”

Presently, Hawaii has a single radar capable of performing BMD, notably the Sea-Based X-band (SBX) discrimination radar which is routinely deployed to the US naval base at Pearl Harbour on Oahu island. The radar is mobile and designed to be used at sea to detect incoming warheads and to discriminate these warheads from missile debris using an X-band (8.5GigaHertz/GHz to 10.68GHz) phased array radar. This is capable of detecting a target at a range of 1,079nm (2,000km) according to open sources. Nevertheless, the MDAA’s paper argues that the SBX, “needs to be in the mid-Pacific, underneath or close to the intercept point, to increase reliability and confidence in shooting down long-range ballistic missiles.”

Other than the SBX, the paper disclosed that a Raytheon AN/TPY-2 X-band BMD radar had been deployed to Hawaii to support tests of the US Army’s Lockheed Martin Terminal High Altitude Area Defence SAM system to Pacific Missile Range Facility (PMRF). The MDAA argued that BMD coverage of Hawaii was quite simply insufficient to adequately protect the islands, stressing the need to, “provide Hawaii with missile defence equal to that of the other 49 states (in the US) and deter (the DPRK) from launching a ballistic missile strike targeting the Hawaiian Islands.”

The remedy advocated by the MDAA included improving the capabilities of the SBX and configuring the AN/TPY-2 radar to provide radar support to the GMD architecture. The paper argued this could be achieved by linking the radar into Lockheed Martin’s Command, Control Battle Management and Communications (C2BMC) system. The C2BMC is the command and control ‘glue’ that joins together the disparate parts of the US’ BMD architecture to provide situational awareness and decision-making support to those protecting the country against missile attack.

A further recommendation included the operational activation of the so-called ‘AEGIS Ashore’ site located at the PMRF. This AEGIS Ashore site has acted as a test facility for similar sites which have been activated in Romania, and which are expected to be activated in Poland in 2020 (story here). Both these facilities form an integral part of NATO’s European Phased Adaptive Approach (EPAA) BMD initiative. The EPAA is designed to protect Europe against short, medium and intermediate-range ballistic missiles with ranges of between 540nm (1000km) and 2,969.8nm (5,500km) launched by the Islamic Republic of Iran, according to an online EPAA summary published by the Washington-DC based Arms Control Association.

The weapons fit for the AEGIS Ashore site is Raytheon’s RIM-161B/C SM-3 Block-IA/B SAMs, supported by the BMD-5.0 configuration of Lockheed Martin’s AEGIS Combat Management System. Beyond the RIM-161B/C SM-3 Block-1A/B SAMs that the Hawaii AEGIS Ashore site can currently launch, the MDAA paper urges the deployment of advanced RIM-161 SM-3 Block-IIA SAMs which are undergoing testing. This missile is equipped with a highly manoeuvrable kinetic warhead and improved target discrimination, compared to previous RIM-161 versions. Tellingly, one of the MDAA’s recommendations was for the MDA to, “deploy and operationalise (sic) a radar at (the) PMRF that meets the MDA’s long-range discrimination requirements in the Hawaiian operations area to enhance and bring more reliability to the (GMD) and the lower level of SM-3 interceptors for emergency activation of Aegis Ashore in Hawaii.”

This radar, the paper continued, will help, “increasing the probability of a kill for the (missile defences) designated to protect Hawaii.”

The desire of the MDAA to see the enhancement of Hawaiian radar coverage moved a step closer with the announcement in early July by the US Department of Defence (DOD) that Lockheed Martin, Raytheon and Northrop Grumman had been awarded contracts to develop BMD radar technology to enhance the protection of the archipelago. Since this announcement the MDA has provided MONch with additional details regarding the radar’s acquisition. The agency said that this represents the initial stage in a purchase of three systems, with the first system satisfying the Homeland Defence Radar-Hawaii (HDR-H) requirement. This radar is expected to be located on the island of Oahu and to have a 180-degree field-of-view. The MDA continued that the HDR-H will not be acquired to replace any existing BMD radars in the US inventory such as the SBX, with any such decision to be made at an as-yet-undefined date by the DOD. Once activated, the radar will feed its imagery into the C2BMC architecture (see above).

Little has been published regarding Northrop Grumman’s approach to the HDR-H requirement. Natheless both Lockheed Martin and Raytheon have new products that they could potentially tailor to this requirement.

Lockheed Martin is developing the Long-Range Discrimination Radar (LRDR ), which open sources state will transmit in S-band using a Gallium Nitride Active Electronically Scanned Array. It will be installed at Clear airbase in central Alaska by 2020 and will provide precision imagery to support the GMD system.

In September 2017, confidential sources disclosed to MONch that a land-based version of Raytheon’s AN/SPY-6 Air and Missile Defence Radar (AMDR) S-band/X-band (13.4-14/15.7-17.7GHz) which is equipping the US Navy’s ‘Arleigh Burke/Flight-III’ class destroyers could be selected to satisfy a British requirement for a new BMD radar (story here). It is possible that Raytheon offers an AN/SPY-6 version to meet the HDR-H requirement.

The MDA statement continued that it expects to award a contract for the radar’s acquisition by the end of this year. The HDR-H is expected to enter service in 2023 according to media reports. Based upon the analysis of previous BMD radar acquisitions, the HDR-H purchase could be worth up to $1 billion. 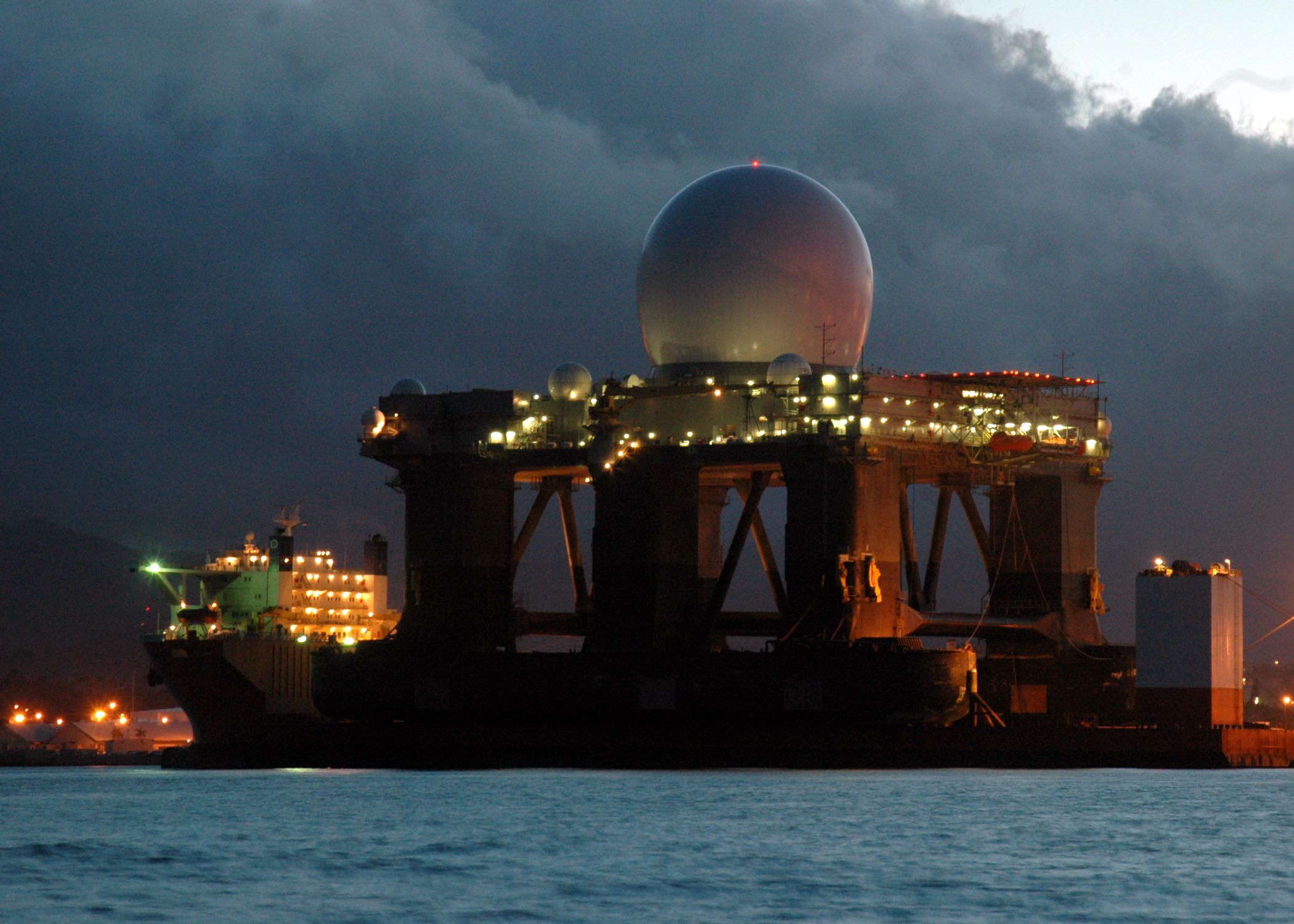