North Korea test-launched a possible ballistic missile on 11 January that appears to have been more capable than the one tested six days earlier, said South Korean authorities, amid heightened tensions over an ongoing arms race on the Korean Peninsula.

The projectile, which was launched eastwards around 07.27 local time from Jagang Province, flew over 700km, at a maximum altitude of 60km and a top speed of Mach 10, before falling into the East Sea (also known as the Sea of Japan) outside Japan’s EEZ, according to initial estimates. By comparison, the weapon tested on 5 January, which Pyongyang claimed was a “hypersonic” missile, is believed to only have reached a top speed of Mach 6 and travelled about 500 kilometres.

Referring to the latest missile, South Korea’s Joint Chiefs of Staff (JCS) assessed it is “an improved version compared with the ballistic missile that was launched on January 5,” while calling Pyongyang’s continued ballistic missile launches a “clear” violation of UN Security Council (UNSC) resolutions.

The MoD in Tokyo stated that the projectile is likely to have travelled less than 700km, assuming it flew on a traditional ballistic missile trajectory, adding that there have been no reports of damage to ships or aircraft in the area. Meanwhile, Japanese Prime Minister Fumio Kishida condemned Pyongyang’s latest missile test as “extremely regrettable”, adding that his government will intensify monitoring of North Korea’s military activities. Tokyo also warned that Pyongyang’s actions not only threaten the peace and security of Japan and the region but are also “a serious issue for the entire international community”.

Japan and South Korea said in separate statements they are still analysing details of the launch, together with the United States. US Indo-Pacific Command described the North Korean test as a “ballistic missile launch“, while assessing that it “does not pose an immediate threat to US personnel or territory or to our allies“. It also said the launch “highlights the destabilising impact of the DPRK’s [Democratic People’s Republic of Korea’s] illicit weapons programme”, adding that US commitment to the defence of the Republic of Korea and Japan remains “ironclad”.

No images of the launch have emerged yet, but North Korean state-run media often releases photographs and/or video footage of its weapon tests a day after they take place.

The latest developments came after the UNSC held a closed-door meeting on Pyongyang’s 5 January missile launch. Shortly before the session, the US and five other countries issued a joint statement criticising that Pyongyang’s actions show its “determination to expand its unlawful weapons capabilities”.

“These actions increase the risk of miscalculation and escalation and pose a significant threat to regional stability…. Each missile launch serves not only to advance the DPRK’s own capabilities, but [also] to expand the suite of weapons available for export to its illicit arms clients and dealers around the world,” according to the statement.

The latest launch was Pyongyang’s second since the beginning of 2022. In addition to the latest missile, North Korea has tested a number of new weapon systems in under a year, including a KN-23-based submarine-launched ballistic missile (SLBM), a long-range cruise missile, a ‘railway-borne’ short-range ballistic missile (SLBM) system, the Pon’gae 5 surface-to-air missile system, and what Pyongyang described as two “hypersonic” missiles. These and other systems are being developed as part of a five-year military modernisation plan unveiled by the country’s leader, Kim Jong-un, during the 8th Congress of the ruling Workers’ Party of Korea (WPK) held in early 2021.

At the time, Kim outlined his country’s plans to “develop defence science and weapon systems” in a bid to modernise the Korean People’s Army, bolster its deterrence capabilities, and enable it to “fight a war at the highest level”.

He said that as part of the ongoing five-year plan, his country was at different stages in the development of new military platforms and systems, including – but not limited to – a nuclear-powered submarine, tactical nuclear weapons, hypersonic glide vehicles, electronic warfare equipment, intermediate-range cruise missiles with conventional warheads, and reconnaissance satellites. 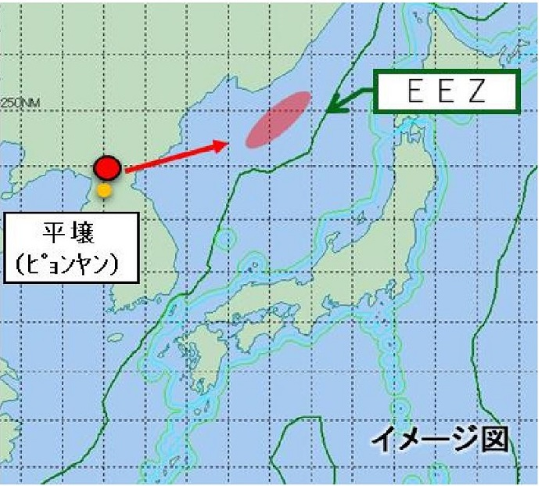 North Korea consistently chooses to test its weapons in an aggressive manner, possibly seeking to test the political will of potential adversaries. (Map: Japanese MoD)