Posted on the Weibo platform on 30 December, the image shows Guangxi displaying a number of flags to mark what appeared to be an induction ceremony. No details were provided about when or where the event took place, but some Chinese sources claim that Guangxi, which was launched in April 2020 and began sea trials later that year, entered service on 26 December with the PLAN’s East Sea Fleet.

The latest developments come after the state-owned Global Times newspaper reported on 30 December that first-of-class Hainan recently achieved “comprehensive operation and management capability” with its embarked Z-8C-series helicopters, Type 726 air-cushioned landing craft, and Type 05 amphibious armoured vehicles, following a series of tests and exercises conducted in the South China Sea. According to the paper, the manoeuvres focused on optimising ways of deploying Hainan – which entered service in late April 2021 – improving C2 procedures, and enhancing interoperability.

“Since the commissioning of Hainan, we have optimised the ship’s deployment and continued improving our abilities to operate ship-borne equipment and steer the vessel through a series of exercises. We are pushing forward the integration between crew members and equipment,” Senior Captain Chen Chenyang, chief of staff of the landing detachment aboard Hainan, was quoted as saying. “We have formed the capability to operate and manage the platform comprehensively and laid a solid foundation for rapidly generating new combat capabilities.”

China has so far launched three Type 075s, the third of which entered the water in January 2021. An indigenous design, this LHD class, which is believed to displace between 30,000-40,000t, marks a significant achievement for Beijing in terms of shipbuilding, as well as in the potential enhancement of the country’s amphibious assault capabilities, especially amid growing tensions with Washington and Taipei over the status of the island of Taiwan. 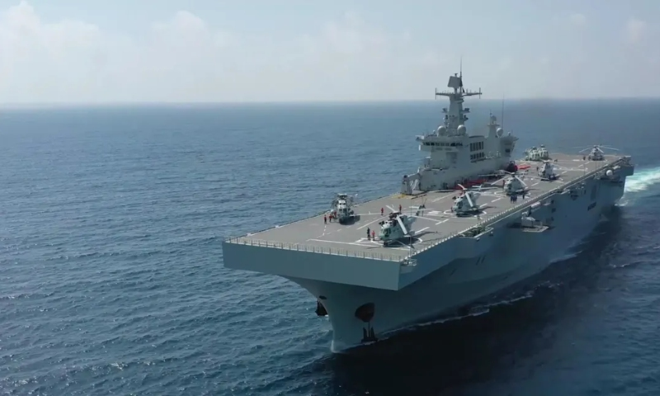 A screengrab from a China Central Television broadcast of the first-of-class Type 075, Hainan. (Photo: CCTV)