South Korean company Hanwha has offered its AS21 REDBACK to compete for the Australian Land 400 Phase 3 Mounted Combat Capability programme.

It is based on the K21 Infantry Fighting Vehicle (IFV) of which over 400 are in-service with the South Korean Army. Several modifications are being made to make it suited to Australian requirements and Hanwha displayed a model of the Redback on its stand at the Land Forces Asia 2018 exhibition.

A spokesperson from the company told MONCh that AS21 is an upgrade of the K21 with additional mobility, protection and lethality capabilities. It includes a 30mm gun, anti-tank guided and a .50cal remote weapon station.

He said that the vehicle weighed 40t and had a crew of three with space for eight dismounts. Unlike the K21 the new AS21 is not amphibious although the chassis is the same. According to the spokesperson, Hanwha will either build a new turret for the REDBACK or it will select an existing turret for installation on the vehicle from companies such as Rheinmetall or Rafael.

He added that the company will establish a local plant in Australia for work on the AS21 REDBACK although it has not decided where yet. The company will build three vehicles for the Risk Mitigation Activity expected to start in 2020.

A total of 467 vehicles are expected with 312 in IFV configuration that will replace Australia existing M113AS4 tracked APCs. The other variant vehicles include command, joint fires, combat engineers, ambulance and manoeuvre support. The price tag for Land 400 Phase 3 is slated at A$10-15 billion. 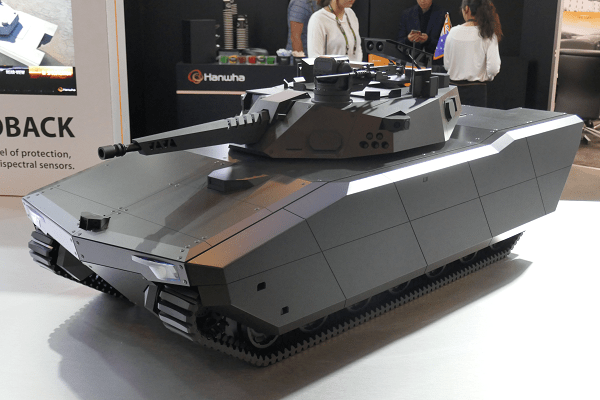