“One of Australia’s Most Important defence Manufacturing Centres”

Hanwha Defense has selected Avalon Airport in Greater Geelong, Victoria, to build a new armoured vehicle centre in Australia, after winning a A$1 billion ($722 million) contract last December to supply artillery and ammunition resupply vehicles to the Australian Army.

The Australian DoD said in a statement that the 32,000m2 centre, construction of which will cost A$170 million, will include multiple assembly lines, a 1,500m test track, a deep-water test facility, and an obstacle course to test capability. It will be built on a 20ha leased site and is expected to create a minimum of 300 jobs over the life of the project, generating ongoing support opportunities for Australian industry until the late 2040s, according to DoD. Design work is now in its final stages, and Canberra noted there is still opportunity for Australian defence industry partners to co-locate in order to streamline manufacturing processes and maximise export opportunities.

Commenting on the decision from Hanwha Defense Australia (HDA), Senator for Victoria Sarah Henderson said Geelong is set to become “one of Australia’s most important defence manufacturing centres,” as other defence industry suppliers will also consider re-locating to the region.

Meanwhile, Australian Minister for Defence Industry Melissa Price confirmed that HDA will build the sovereign armoured vehicle manufacturing and maintenance facility to deliver platforms under the Land 8116 Phase 1 (also known as Protected Mobile Fires): the Australian Army has ordered 30 155mm AS9 Huntsman self-propelled howitzers SPH and 15 AS10 Huntsman armoured ammunition resupply vehicles (AARV) to enhance its artillery capabilities. The Huntsman vehicles are based on Hanwha’s K9 Thunder SPH and K10 AARV, both of which are operated by the Republic of Korea Army, among other armed services.

Commenting on the December 2021 award, HDA Managing Director, Richard Cho, said that Hanwha’s Australian facility would also become “a critical and important secondary line of supply back to South Korea [and that it will] also help Hanwha fulfil contracts in other parts of the world and deliver capacity to engage with Five Eyes nations.”

According to DoD’s 2020 Force Structure Plan, the Australian Army is expected to acquire an additional batch of these vehicles in the late 2020s, under the second phase of the Land 8116 project. Estimated costs for the second batch, which will also be built in Geelong, are set between A$1.5 and A$2.3 billion. Moreover, the plan revealed that estimated costs for an upgrade programme of these vehicles – set to start in the 2030s – range from A$2.1 to A$3.2 billion.

HDA is also hoping to provide the Australian Army with its Redback IFV as part of Canberra’s Land 400 Phase 3 project, which is aimed at providing and supporting up to 450 tracked IFVs and 17 manoeuvre support vehicles. The vehicle is currently competing with Rheinmetall’s Lynx KF41 IFV to meet this requirement: HDA told Military Technology that the Redback would also be built at the future Avalon Airport facility should the company win the contract. 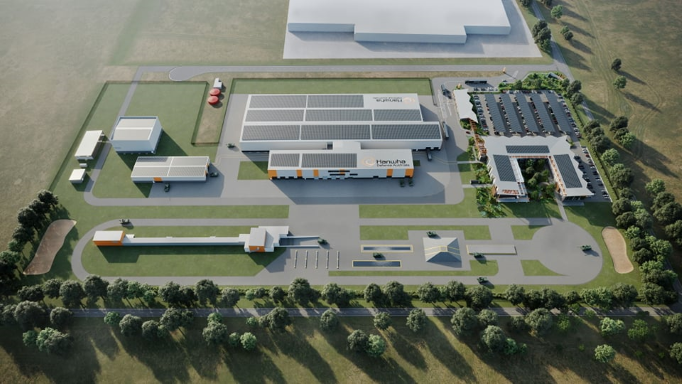 A computer-generated image of the proposed facility. (Hanwha Defense)