Mr Miller provided the business case for a defence organisation to invest in business jets, noting these platforms provide tremendous value in the special mission role. Citing examples from his portfolio, the corporate executive pointed out: “Compared to an airliner, they can perform the mission higher, faster, farther and less expensively. The Gulfstream cabin is also ideal for special missions thanks to its quiet environment, low cabin altitude and 100% fresh air, all of which result in less fatigue for crew and passengers. In the case of medical airlift missions, that cabin environment is ideal for patient transport.”

As the need for a US Air Force Joint Surveillance Target Attack Radar System Recapitalization (JSTARS Recap) effort still looms large on the domestic business development horizon, Gulfstream Special Missions has a robust presence outside and within the United States. While many specific government operators cannot be named because Gulfstream signs nondisclosure agreements with all of its customers, some governments and entities have publicized the delivery of their Gulfstream special mission aircraft. Mr Miller noted: “The Polish Ministry of Defence recently received two Gulfstream G550s to use as head-of-state aircraft. Israel, Singapore and Italy use the G550 for conformal AEW (CAEW) platforms, and all branches of the US military choose Gulfstream aircraft to support their operations.”

Asked to discuss other recent contracts and deliveries, Mr Miller responded, “Gulfstream rarely announces a delivery before it takes place.” That said, this summer, two Gulfstream special mission aircraft were delivered at the company’s headquarters in Savannah, Georgia.

In July, the Beijing Red Cross Emergency Medical Centre accepted the delivery of a state-of-the-art G550 medevac aircraft to be used for disaster relief and air rescue services. “This G550 features a dedicated medical bay outfitted with advanced equipment to sustain and stabilise critically ill patients, including advanced life-support capabilities, a bed designed to accommodate an infant incubator and a powered gurney loading system on the aircraft stairs,” the subject matter expert said. “The Beijing Red Cross Emergency Medical Centre’s medevac G550 also allows for 360-degree in-flight patient access, the first such medevac to do so.”

Also in July, Gulfstream delivered a special missions G550 to the US Navy in support of their Telemetry Range Support aircraft programme. This Gulfstream-designed and –modified G550 will host an array of sensors to support the navy’s telemetry range support mission.

Gulfstream also remains focused on complete life cycle support of its special mission aircraft. Indeed, this July US US Department fo Defense (DoD) awarded another contractor logistics support services (CLS) management contract. Mr Miller concluded: “Gulfstream Customer Support is a major component of Gulfstream’s business, both for civilian and military and government customers. As Gulfstream’s special missions fleet grows around the world, the need for support and technicians where Gulfstream aircraft are based, grows accordingly.” 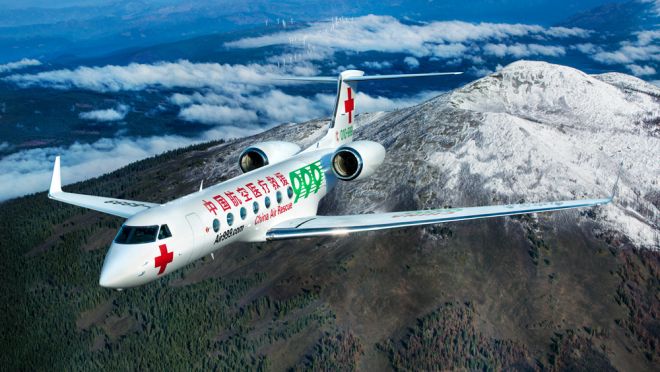