This abridged article (for full article, please see SAFETY & SECURITY #1/2018 available at GPEC 2018, or order here) looks at a number of tactics and techniques exist to assist the dangerous mission of forcible entry.

Tactical forcible entry is likely the most difficult and dangerous operation that a counter-terrorist response team, special forces unit or infantry squad can be required to execute. In general law enforcement it can also be an action required by officers on patrol. In either tactical, forcible entry can mean confronting uncertain situations including an armed and possibly desperate individual or group. Furthermore, resorting to a forced entry means that all other tactical options have been exhausted. The actions also place those entering at risk of life and injury. Therefore, the objective of forced entry tactics and equipment is to not just mitigate these risks but to turn the situation around, and regain the tactical advantage.

Forcible entry is necessary in military and law enforcement especially in urban environments. Both civil law enforcement and MOUT (Military Operations in Urban Terrain) share many of the same techniques and tactics, although the military may have the option to escalate the destructive power that is employed during such procedures. For both the military and civilian worlds the greater the level of violence applied the higher the possibility of collateral damage and unintended casualties. Thus, a delicate balance needs to be maintained. This is particularly challenging as the traditional entry tactic emphasises speed, shock and violence of action.

Operations such as that which occurred in Saint Denis underscore the fraught danger of forcible entry operations. A critical element to any forcible entry scenario is time, and such operations must be executed rapidly in a series of concurrent and successive actions. As a tactical team leader anonymously explained to SSI: “The longer it takes to breach a door or wall, the more time your adversary has to react to your actions and respond with deadly force.”

In addition, the more predictable the entry site and the longer the breaching takes the greater the potential that the targets will be able to effectively respond, perhaps threatening deadly force. Law enforcement operations against illegal drug facilities and gang properties can be analogous to situations facing military units in attacking fortified buildings. Here the opponent takes deliberate efforts to counter any entry, to prevent or slow it and to target those attempting it. This can include blocking doorways, windows and hallways, reinforcing doors and placing obstacles and booby traps. The more determined a ‘defender’ is in holding their position the more difficult an entry can be and the likelihood of lethal consequences on both sides.

Three types of forced entry can be utilised including dynamic, stealth and subdued.

The initial entry is the most critical and dangerous action. Here the entry team is most vulnerable and the advantage lies with those holed up. This action is often referred to as the ‘fatal funnel’ as at this point the team ‘stack’ where the entry team will follow each other through the single opening. This is true even where multiple, simultaneous entries are executed, though this has the advantage of dispersing the opponents attention and reaction. As a former US Army combat engineer and law enforcement SWAT (Special Weapons and Tactics) member and tactics trainer explained: “The importance of achieving a successful breach cannot be stressed enough. If your breach fails, there is much to lose; hostages may die or your team may be endangered as they are sitting ducks with nowhere to go if fired upon.”

Doctrine states that preferably breaching should be at an unexpected point such as a wall, window or other location. Doors and existing entrances should be a last resort. However, available time and equipment, and the overall tactical situation can override this guideline. There are four breaching options; mechanical, ballistic, thermal, and explosive with each having its advantages and disadvantages. For example, mechanical breaching using a ram, sledge hammer, pry bar, axe, bolt cutter, pneumatic and hydraulic tools, or chainsaws is the simplest.

Forcible entry remains a distinct challenge for both law enforcement and the military. For the latter the spread of urban areas increases the likelihood of MOUT and the need to execute such operations. Law enforcement similarly sees breaching as a necessity in dealing with drug gangs and armed encounters. Technologies and innovative tools provide new capabilities and tactical options but in the end forcible entries still require putting individuals in harms way; a situation that is not likely to change soon. For full article, please see SAFETY & SECURITY #1/2018 available at GPEC 2018, or order here. 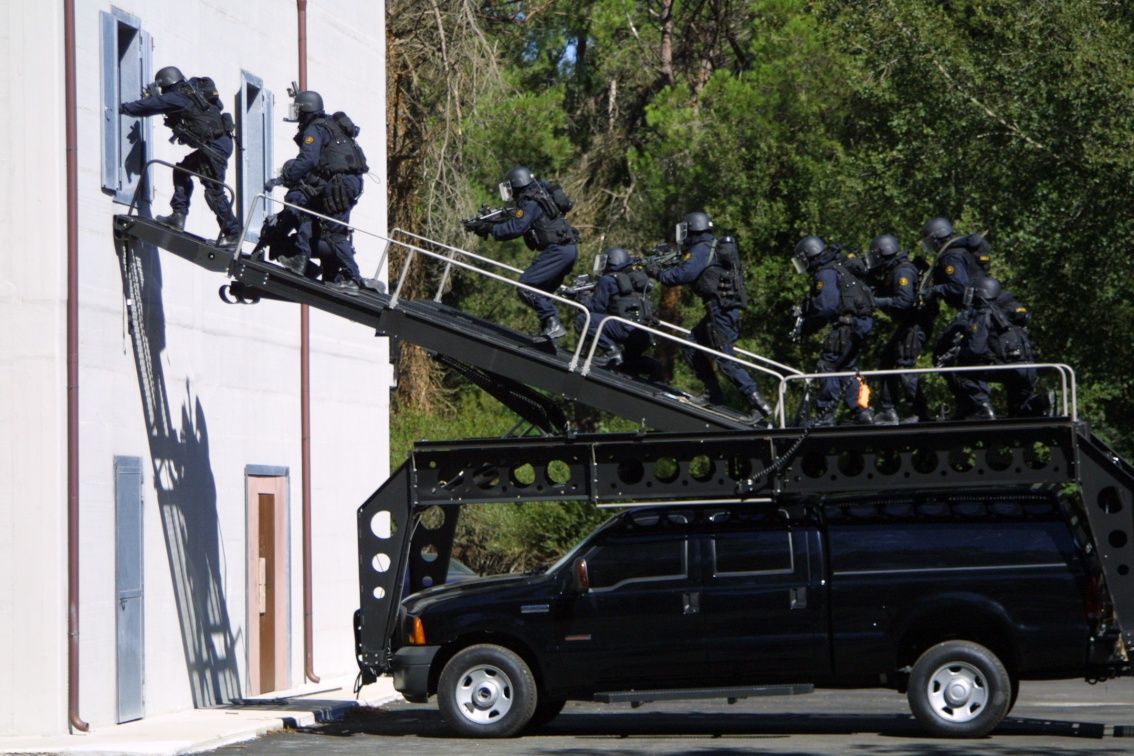