After a comprehensive mid-life upgrade (MLU) to meet future matirime challenges and threats, HSwMS GOTLAND, an attack submarine of the Royal Swedish Navy, has been relaunched and is ready to start her sea trials.

Strategically important in a nation’s defence, submarines are designed to operate for decades in challenging environments whilst remaining adaptable given the advance of technology and future threats. To keep them at the cutting-edge of technology, Sweden’sGOTLAND-class submarines have received regular overhauls and upgrades during their operational life. After this MLU, the GOTLAND submarine  now received capabilities that will be found in the next generation of Swedish submarines, the A26.

“The relaunch of GOTLAND is an important milestone in the evolutionary development of Swedish submarines. After a comprehensive upgrade, integrating the latest generation of important systems such as the Stirling engine, modern sensors and new management functions, Gotland is almost a new submarine, ready to take on missions around the world,” says Gunnar Wieslander, Senior Vice President, head of business area Kockums at Saab.

This updated version of GOTLAND will pave the way for the modern Air Independent Propulsion (AIP) submarine under production: the A26 for the Royal Swedish Navy. More than 20 systems on-board the new GOTLAND-class will be implemented in the A26. The MLU of GOTLAND therefore contributes to the test and qualification of some of the innovative solutions to be implemented in the future Swedish A26 submarine class.

Facts about the GOTLAND MLU 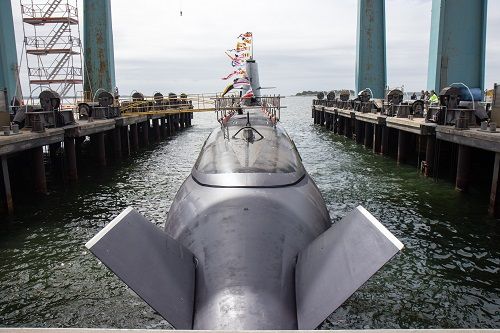