“PEGASUS is of great industrial policy importance for Germany as a whole as a high-tech location. The overall responsibility for the system lies in Germany and the value creation largely takes place through national companies,” explained the company’s CEO, Thomas Müller. “This gives the Bundeswehr unrestricted access to all the technologies used.”

“We have developed the modular and high-performance Hensoldt reconnaissance solution KALAETRON on the basis of the already flight-proven ISIS reconnaissance system. KALAETRON offers unique reconnaissance capabilities based on powerful German key technology. PEGASUS thus forms the core for a sovereign reconnaissance network and the basis for future capability development in the field of self-protection and electronic warfare,” added Celia Pelaz, Hensoldt’s head of strategy and head of the Spectrum Dominance and Airborne Solutions Division.

Hensoldt is acting as general contractor for the “billion-dollar” project to develop, manufacture and integrate the PEGASUS system, including the three Bombardier GLOBAL 6000 aircraft that will embark the systems, plus the associated evaluation stations, as well as being responsible for production of the entire reconnaissance technology. Lufthansa Technik will manage the acquisition and modification of the aircraft. Overall, almost 30 German companies of all sizes are involved in the PEGASUS programme as partners or suppliers. 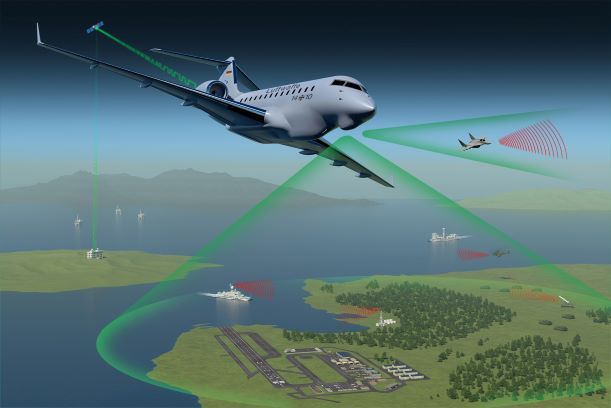 The detection and evaluation of electromagnetic signals is an area in which Hensoldt has particular expertise. (Photo: Hensoldt)