The demand for unmanned aircraft continues to grow exponentially, with maximum consideration being given to the use of long-range aircraft – the medium-altitude, long-endurance (MALE) drones – that offer the capacity to carry advanced sensors, thereby providing a robust, all-weather, 24/7 ISR capability over a geographically large area. On 14 April, the Budget Committee in the German Parliament approved the pan-European EURODRONE contract, authorising system development and paving the way for Europe’s premier unmanned aircraft programme for the coming decade.

EURODRONE is a collaborative project undertaken by Airbus, Dassault Aviation and Leonardo. German Chancellor Angela Merkel and French President Emmanuel Macron gave the programme its ‘green light’ on 5 February, during a meeting of the Franco-German Defence and Security Council. The April approval frees up the sum of €3.1 billion for system development, according to the MoD. This will exclude any possible weaponisation, however. The go-ahead given by Germany‘s ruling Grand Coalition provides significant momentum, since the cooperative programme with three European partner nations – France, Italy and Spain – is already confronting delays. Setbacks have been experienced since the programme’s initiation in 2015, some of which go back to disagreements over cost, design aspects and industrial responsibilities. Signature of the actual contract had been expected before the end of last year.

Also known as the European MALE Remotely Piloted System (RPAS), the EURODRONE project calls for completion of the joint by the end of the current decade. Its layout is for a twin-engine aircraft in two configurations: one for ISR and a second that can potentially be weaponised. The ability to undertake ISR missions over long distances with extreme precision is testament to a desire to find the best possible methods of adapting to the emerging joint and increasingly asymmetric characteristics of warfare. The EURODRONE programme will undoubtedly influence the evolving roadmap for another important European programme undertaken by France, Germany and Spain – the Future Combat Air System (FCAS), with EURODRONE forming a key part of this systems-of-systems approach. Outgoing Airbus Defence and Space CEO, Dirk Hoke, noted that with the signing of the official contract between the four partner nations and industry, as well as with the Organisation for Joint Armament Cooperation (OCCAR), the four participating nations are going to achieve fully-fledged sovereignty in unmanned capabilities. That contract signature is expected to take place in the next few weeks. OCCAR is managing the EURODRONE programme on behalf of the four European partners.

Airbus‘ specifications indicate that the air vehicle has a wingspan of 26m and a projected flight endurance of 27 hours. It will be an all-weather-capable UAV design, adopting a physical configuration comparable to the TALARION reconnaissance UAV (also known as the MALE UAV) under development by Airbus (then known as EADS) in the 2000s. A turboprop engine offers EURODRONE a greater maximum take-off weight and increased ceiling (13,700m), with a corresponding increase in payload capacity – which Airbus Defence and Space indicates lies in the 2,300kg range.

The drone system will replace several unmanned air platforms of American and Israeli origin, currently used primarily in ISR roles, at the end of this decade. The new drone is to be fitted with subsystems and components to offer user nations the capability to conduct ground support and strike missions – although Germany declined to opt for such a capability. There is an ongoing debate in the German Parliament whether drones of this kind should be technically capable of carrying weapons. Large sections of the left-leaning partner in the Grand Coalition, the Social Democratic Party (SPD), criticise the potential procurement and use of autonomous weapon systems like the EURODRONE. The party‘s opposition in 2020 resulted in the government not weaponising the HERON TP drones on order from Israel. There are many arguments to support the idea of weaponsed drones in Bundeswehr service, however, one of which is to protect forces on the ground. As the SPD forms part of the Parliamentary Budget Committee that approved the multinational EURODRONE project, the statement regarding the drone’s development included a clause stating the programme “should initially only be about the development of an unarmed drone system.”

The four partner nations have set out a roadmap for procuring 63 EURODRONE UAS, plus ground control equipment and simulators, for a total amount of €7.1 billion, each system costing approximately €160 million. For comparison purposes, General Atomics‘ REAPER strike-capable reconnaissance UAS (in use with Germany’s three partner nations in the EURODRONE project) costs stand at around €200 million. It is understood that Germany will procure 21 airframes, in addition to twelve ground control stations and four transportable flight simulators. According to Bundeswehr sources, the new drone could replace the inventory of HERON drones by 2025. The current contract is for 20 EURODRONE systems, each of which will consist of three aircraft. As such, Germany – the programme’s lead nation – is on contract for seven systems, while Italy has committed to five systems. Spain and France are each targeting four EURODRONE systems. Final assembly and ground testing of the MALE UAV may be undertaken at Airbus‘ premises in Manching, Germany. Airbus anticipates EURODRONE’s first flight in 2025, and deliveries to be begun in the 2028-2029 timeframe.

Bridging the gap, two EURODRONE partner nations have opted for interim solutions: Spain for four General Atomics MQ-9 REAPER Block 5 aircraft and two mobile ground control stations, valued at €158.35 million; while France has ordered a third REAPER Block 1 aircraft plus two ground control stations, for delivery in 2019, and has since contracted for Block 5 aircraft, to be delivered in 2020, comprising three airframes and one ground control station. Italy already operates PREDATOR MQ-1C and REAPER drones from Amendola Air Base. Germany favoured leasing three to five Israel Aerospace Industries (IAI) HERON TP systems in 2018, at a cost of about €580 million. The lease contract with IAI (Airbus Defence and Space operates and supports HERON 1 for the Bundeswehr, and is likely to expand this arrangement to include the HERON TP) will provide an interim solution until 2025, when EURODRONE is expected to enter service.

There are four main factors in favour of EURODRONE: First, as far as ISR missions are concerned, a MALE platform carrying highly sophisticated payloads consisting of imaging sensors can be deployed as a reconnaissance platform launched from secure bases at a significant distance from the theatre of operations; second, the drone can operate in environments denied to manned platforms, such as higher or lower altitudes, for instance; third, the platform’s long endurance provides sustained support for more efficient time-critical targeting and other missions requiring greater persistence than that provided by any manned aircraft; finally, in peacekeeping operations, the UAS can be deployed within new C4ISR networks to provide a sort of reconnaissance-strike complex. Significantly, by taking advantage of the increased manoeuvrability, interoperability, survivability, sustainability and suitability anticipated for the EURODRONE platform, systems of this kind will be able to conduct missions more efficiently, increasing the relative effectiveness of manned platforms.

In conclusion, the development of UAS in the EURODRONE category is one of the most dynamic fields of air power and harnesses a wide variety of enabling technology, according to LtGen Friedrich Wilhelm Ploeger, former Executive Director of the NATO Joint Air Power Competence Centre (JAPCC). “NATO and its constituent nations have long recognised the potential of UAS. An indicator is the growing number of potential mission scenarios from the classical information and data collection, decoying and weapons delivery to combat and combat support applications, as well as border and harbour patrol. The development of this capability offers a tremendous field of business. However, without coherent and comprehensive concept development, there is a risk for the nations – and NATO – of overstretching finite resources and money,” he stated.

Even so, Germany’s EURODRONE partners, France and Italy, are pushing their own technology competencies, and the development of demonstrators and prototypes, by launching well-funded, large-scale programmes. Securing the competitiveness of German-built UAS necessitates close collaboration between politicians, industry and research facilities. Adding UAS technology to the list of indispensable national core competencies in militarily relevant technologies is an important basis for expanding such competencies in Germany. In order to remain competitive in the world market with innovative unmanned technologies, the German aerospace industry needs a resilient framework. 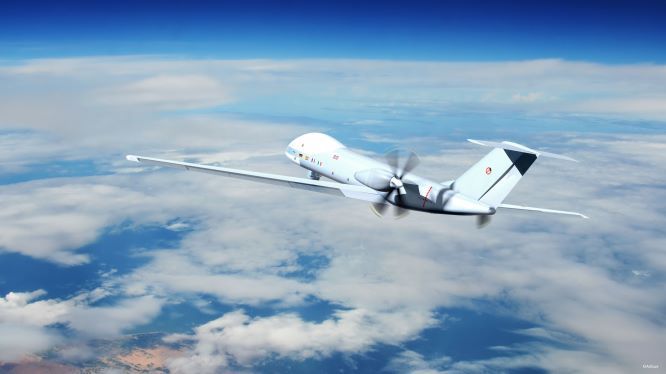 France, Germany, Italy and Spain have set out a roadmap for procuring the EURODRONE UAS, with deliveries expected to commence by 2028. (Image: Airbus Defence and Space)