General Motors Back in Defence

General Motors reentered the defence industry in 2017 with the re-establishment of subsidiary GM Defense LLC. On 4 May, GM Defense unveiled its Concord, NC production facility, which will build air-droppable Infantry Squad Vehicles (ISV) for the US Army. The company is currently on contract for 649 ISVs.

The facility is tailored for a low-volume production environment. Rather than the traditional, moving assembly line, the site supports a ‘stall-built’ vehicle process, with seven build stations. Joe Moraschinelli, Engineering Group Manager at GM Defense, noted these are “craftsman type stations, for cycle times of more than 10 hours in a station, versus 35-45 seconds of cycle time on a moving assembly line.” He called attention to other overarching efforts bringing to bear capabilities and efficiencies from the parent company. “Even though we are low volume, we still follow the same disciplines as ‘big GM’ does – the same engineering and the same manufacturing all the way across the board. This includes full traceability back to the VIN [vehicle identification number] by component. Because this a 90% commercial off-the-shelf vehicle [built from 90% commercial parts and derived from the civilian 2020 Chevrolet Colorado ZR2 midsize truck architecture], a lot of that is in place.”

While the facility is scaled to deliver about 2.5 units/week, it was built to handle full rate production. “Optimally we can meet up to 7-8 units per week, if we needed to. There is plenty of room for expansion,” Moraschinelli emphasised. The Army’s ISV acquisition objective is 2,065 vehicles.

The Pentagon is looking to recompete the Joint Light Tactical Vehicle (JLTV) for the US Army & Marine Corps in FY 2022. Jeff Ryder, Growth and Strategy VP, GM Defense, confirmed for MON, “we are competing for JLTV. That process is underway and we are targeting that.” 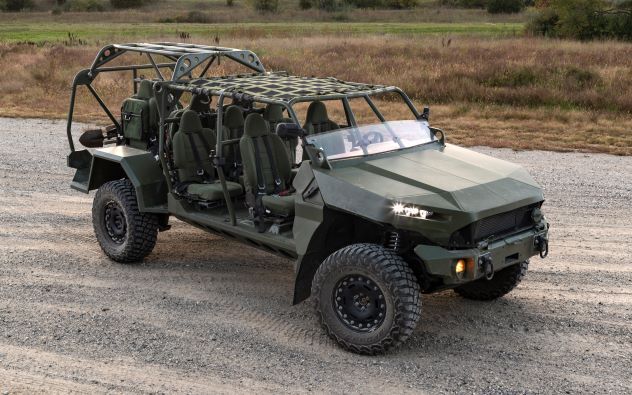 M’s ISV can accommodate up to 9 soldiers and is air-transportable. Fielding is currently scheduled to begin before year end. (Photo: GM Defense)