General Dynamics Mission Systems (GDMS) announced a strategic partnership with Dedrone on 3 September, under which GDMS has made a significant equity investment in Dedrone and becomes a value-added reseller (VAR) for its drone detection and defeat technology.

GDMS will exclusively supply Dedrone’s counter-drone technology to its global defence, government, intelligence and critical infrastructure customers. “The intrusion of private and restricted airspace by [UAS} is one of the fastest-growing threats facing our customers and Dedrone’s counter-UAS technology platform is the market-leading solution to defeat those threats,” offered Chris Brady, GDMS President and a newly appointed member of Dedrone’s advisory board.

In the counter-drone technology market, Dedrone’s exclusive focus on C-UAS detection and defeat have enabled it to become the industry leader with the rare distinction of having production systems fielded and in operational use worldwide. The Dedrone C-UAS technology portfolio combines machine-learning software with best-in-class hardware sensors, electronic attack methods such as smart jamming and the ability to provide early warning, classification of and mitigation against drone threats. Dedrone’s capabilities are used by hundreds of customers globally, including the US military, allied and coalition forces, correctional facilities, airports, utilities and corporations, among others.

“With General Dynamics, Dedrone’s technology will reach a broad, global customer base, opening opportunities to provide mission-critical airspace security systems to customers both in the US federal and defense sectors, as well as their global critical enterprise security customers,” commented Aaditya Devarakonda, CEO of Dedrone.

Related to 2019 Contract for Eight Helicopters and a Simulator 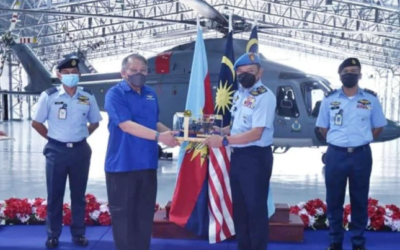