In what might already be considered one of the most successful flight-test programmes of all time, the Spirit of Innovation – a one-of-a-kind experimental aircraft, with a new all-electric powerplant installed on a modified kit-built high-performance turboprop platform – almost achieved its planned mission goal during its first flight.

Speaking at a recent media event at Boscombe Down, the British military’s flight-test centre – where Spirit of Innovation made its first flight on 15 September – Matheu Parr, Customer Business Director of Rolls Royce Electrical, revealed that the aircraft’s on-board speed indicator touched 210mph (336km/h) during its first flight. It has been designed and built by a Rolls-led team with the goal of breaking the existing 212mph speed record for all-electric flight.

“And in our first flight, taking off with the landing-gear doors not fully retracting, we managed to go 210 without really trying […] So we know we’ve got a fantastic aircraft that’s going to break that record,” he explained.

It’s more than just the flight-test venue that gives a potential military dimension to Rolls’ project, though. Dial down the high-speed performance and scale up other elements of airframe utility, and it’s not difficult to imagine an aircraft based around this kind of powertrain technology supplying the Air Force with, at the very least, a viable early-stage training platform.

“If you think about the way pilots learn to fly, every pilot starts in a small two-to-four-seater aircraft,” Parr observed. “These aircraft are up in the air 14, 15 hours a day: they operate out of a single base, circle around, and return. They are perfect for electrification. The battery technology we have today can fit nicely into these aircraft and offer a clean solution straight away. We’ve got some really interesting opportunities, even in the UK, where the government is looking at their existing air-trainer fleet, and [wondering] can they replace them with all-electric aircraft? We firmly believe they can.”

The Spirit of Innovation’s cockpit is deliberately sparse: when the primary goal is to set a new speed record, an inevitable consequence is the need to limit on-board equipment to only what is necessary to safely fly the aircraft at the maximum edge of its performance envelope. This puts it some considerable distance, conceptually, from the cockpit of a frontline fighter such as the F-35, and even further away from the cockpit pilots will occupy in the RAF’s next fighter platform, TEMPEST. But electrification will play a part there, too, and Parr says the speed-record attempt will feed in and read across to Rolls’ work on that system.

“[Within the] TEMPEST [program] we’re looking at hybrid propulsion systems,” he stated. “As the power demands of these aircraft go up, as they require more advanced electronics, radars, et cetera, on board, they need to generate more electricity. We’ve been taking the same electrical machines that we’re developing and then feeding that technology through to the core of Rolls-Royce’s business.”

Angus Batey reporting from Boscombe Down for MON 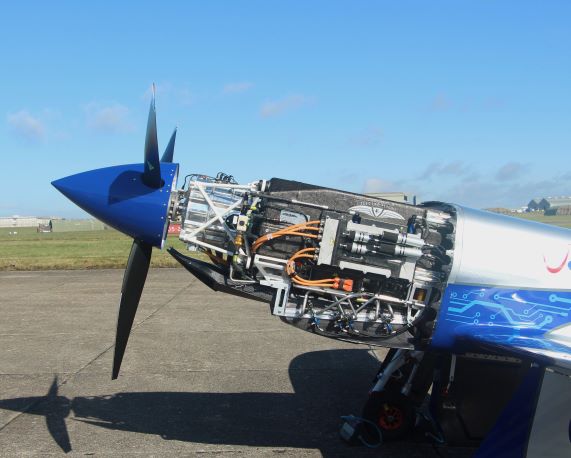