From SATCOMs to Parachuting Dogs…

The biennial Special Operations Forces Innovation Network Seminar (SOFINS) concluded in western France last week, with industry offering up a series of technologies designed to support special operations in the age of the Great Power Competition.

Addressing delegates at the event at Camp Souge, near Bordeaux, French Armed Forces Ministry spokesman, Hervé Grandjean, illustrated how innovative equipment and materiel must be adapted to the needs of special operations. “New technologies that the forces and units present will be able to be tested on site, in real conditions,” he explained, before describing how several test zones were featured at SOFINS for the first time, including all-terrain and riverine mobility; and urban combat.

Also present at the event was the French Special Operations Command’s (COS) Commander, Maj Gen Éric Vidaud, who told delegates how French SOF must be adequately equipped to conduct special operations effectively. Specifically, he called for an ability for French SOF to be able to “intervene in this rather special environment that is the militarised grey zone […] Technology makes it possible for us to surprise and, ultimately, to ensure that innovation can give us a significant advantage over our adversaries.”

Grandjean highlighted several technologies on show at SOFINS, including the Airbus mock-up of the NH90 TFRA Standard 2 helicopter. The COS is slated to receive a total of 10 helicopters by 2026, with an initial tranche of six aircraft due to be delivered next year. Grandjean described how these helicopters, which will be operated by the 4th Special Forces Helicopter Regiment in Pau, will be equipped with the Euroflir 410 NG “an optronic mission observation system that allows reliable and long-distance detection of obstacles or threats to secure penetration trajectories, in tactical flight and in very dark night conditions.”

He also mentioned the TopOwl NG helmet, which “adapts to new sensors and offers new capabilities in terms of symbology and stereovision,” and the Eurofl’Eye pilot observation optronic system, which “provides independent 3D vision to each crew member and piloting assistance in a degraded visual environment.”

Grandjean also highlighted the ARCANE Oxygen Solution, which enables military working dogs to conduct high altitude parachute descents while attached to their handlers, as well as the DAPCO Landing Aid Device, which provides military freefallers with an audible signal when they are just metres from landing, in order to maximise safety.

Also promoted at SOFINS was Airbus’ UHF military communications payload, which is co-hosted on the EUTELSAT 36D telecommunications satellite. Developed in collaboration with the COS, the solution provides a next-generation satellite communications capability for French SOF seeking to access resilient and secure connectivity in highly complex and contested operating environments. “Military UHF SATCOM are used by the armed forces for operations on land, at sea and in the air. They have a high level of interoperability and are therefore very useful for multinational and coalition operations. The UHF band is very flexible and is of particular interest to special forces units, as it offers a lightweight, robust and highly secure means of communications,” an Airbus spokesperson confirmed in a statement. 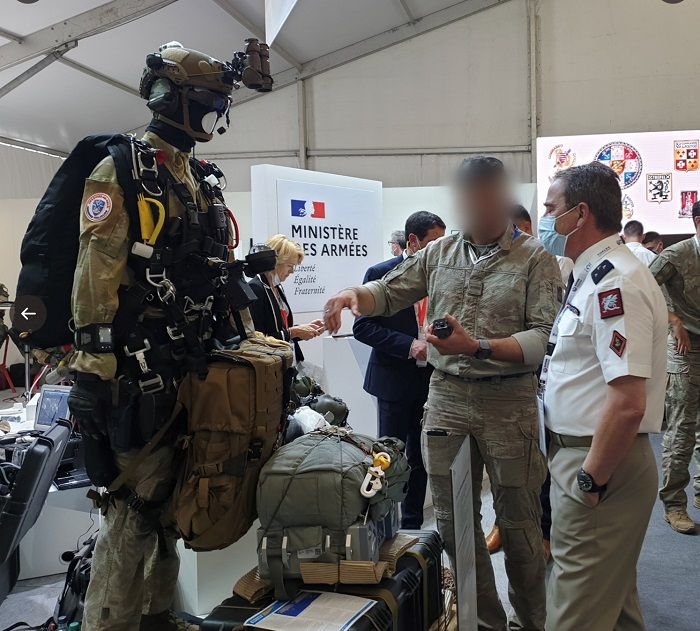