The Foreign Ministers of France and Germany, Jean-Yves Le Drian and Heiko Mass, issued a joint statement on 15 November, affirming their “unwavering support for the independence, sovereignty and territorial integrity of Ukraine.” The announcement followed a meeting in Brussels with the Ukrainian Foreign Minister, Dmytro Kuleba, and stated that any “new attempt to undermine Ukraine’s territorial integrity would have serious consequences.”

In a separate meeting, President Macron spoke with President Putin on the same day, warning that France was ready to defend Ukraine’s territorial integrity, according to AFP. However, both leaders reportedly expressed their dissatisfaction at the worsening situation in east Ukraine.

The joint statement also called for Russia and Ukraine to adopt a posture of restraint and transparency, and to provide information about the movement of armed forces into border area. It commended Ukraine for its restraint earlier in the year, but urged Kiev to continue implementing the Minsk accords and to seek resolution through the Normandy format.

Messaging and control of information are seen as essential, never-ending tasks by the Kremlin. It assumes that Russia and its competitors are in a near-constant state of confrontation, and that care must be taken to ensure the information space is continually shaped in Russia’s favour. To that end, Putin has offered to mediate in the migrant crisis on the Polish-Belarusian border, and has ostensibly applied pressure to the Lukashenko regime, by stating the intent to cease pumping gas through the country. He also engages in frequent meetings with foreign counterparts, portraying himself as an approachable, agreeable politician.

Pervading all Kremlin messaging is an element of deniability: it is not clear that Russia has instigated the migrant crisis. There is a Russian force build-up, but it has not been reported in the same way as the  developments this spring. The Kremlin maintains that Ukraine has violated the Minsk agreement, not Russia. Wagner mercenaries appear to be spreading throughout Africa. This serves to distance Russia from some of the more challenging aspects of its foreign policy, and to prevent outright condemnation, as it is unclear whether specific events are Kremlin policies or the choices of independent actors. Sometimes, a private military company is just a private military company; sometimes, it is an instrument of state – for example.

On the other hand, there are also overt shows of force. On the morning of 15 November, Russia conducted an anti-satellite missile test against one of its defunct satellites. Russian strategic bombers have conducted flights over Belarus, and Russian and Belarusian paratroopers conducted a joint landing in Belarus. This represents the coercive edge of Russia’s approach to its foreign relations; while Putin appears willing to talk, it is also clear that the use of force is always an option, should events progress unfavourably for Russia.

Sam Cranny-Evans is a research analyst for the Royal United Services Institute, London 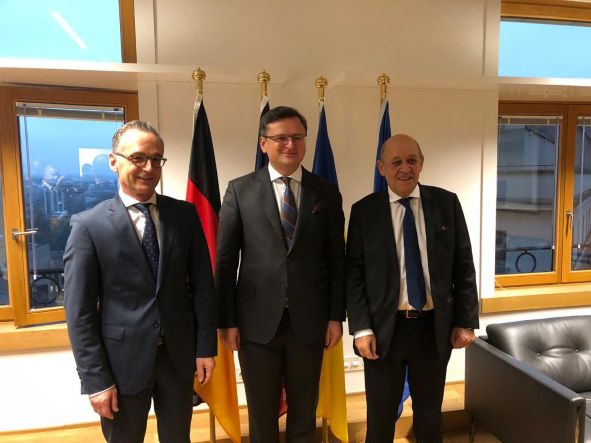 France and Germany have warned Russia of severe consequences if it attempts to compromise Ukraine’s territorial integrity. (Photo: French government)