On 24 July, Navantia launched the fourth of the five AVANTE 2200 corvettes it is building for the Royal Saudi Naval Forces (RNSF) at its San Fernando shipyard.

JAZAN was launched in the presence of Vice Adm Fahad Bin Abdullah Al-Ghofaily, Commander of the RNSF; Adm Antonio Martorell Lacave, Chief of Staff of the Spanish Navy; and dignitaries and officials from SEPI [the Spanish state holding company that operates Navantia], Navantia and SAMI (Saudia Arabian Military Industries).

Adm Al-Ghofaily highlighted the importance of the ALSARAWAT (AAVANTE 2200) project as one of the key acquisition programs demonstrating the RNSF’s commitment to developing new capabilities aligned with Kingdom’s strategic Vision 2030. He further noted that the success of the project establishes a solid foundation for the Kingdom’s strategic partnership with Navantia.

Adm Lacave underlined that “this corvette is an unequivocal demonstration of Spain’s industrial capability in the field of naval shipbuilding, and of its strong commitment to technological innovation,” remarking further “this the first time that the Spanish Navy has embarked on such a far-reaching naval programme […] A clear proof of this commitment, and of the steady progress of the programme, is the effort made in the training of the crew of the first corvette [such as] the specialised courses in Combat, Operations, Communications, Navigation and Deck, Propulsion and Electricity, as well as the training on tactical procedures which is currently underway at the Fleet’s Tactical Simulator.”

Navantia Chairman, Ricardo Dominguez, stressed the company’s strategic definition of the AVANTE 2200 programme, pointing to the investments it has made in digitalization and new technologies to enable the vessels to be built faster and more efficiently. He also highlighted the invaluable collaboration between the navies and Ministries of Defence of both nations that have contributed to a successful, valuable programme.

In remarks delivered remotely during the ceremony, which was held under strict pandemic protocols, SAMI CEO, Eng Walid Abukhaled, emphasized that “SAMI is dedicated to developing Saudi Arabia’s military industries and empowering the indigenous naval technology capabilities, as well as contributing to supporting the Kingdom’s defence ecosystem. This aims to achieve self-sufficiency in the sector by enhancing the RSNF’s technical capabilities. This achievement is consistent with the Public Investment Fund’s efforts through SAMI to localise cutting-edge technology and defence systems, and build strategic economic partnerships. SAMI plays a pivotal role in supporting the localisation of 50% of the Kingdom’s military spending and enhancing the local capabilities in line with the goals of Saudi Vision 2030.”

During the visit to San Fernando, the RSNF delegation toured the shipyard and the Navantia Training Centre, where the crew and maintenance teams for the corvettes are being trained. It also visited the Land Based Training Site and simulators, and was updated with regard to the Technology Transfer programme that is part of this comprehensive contract. 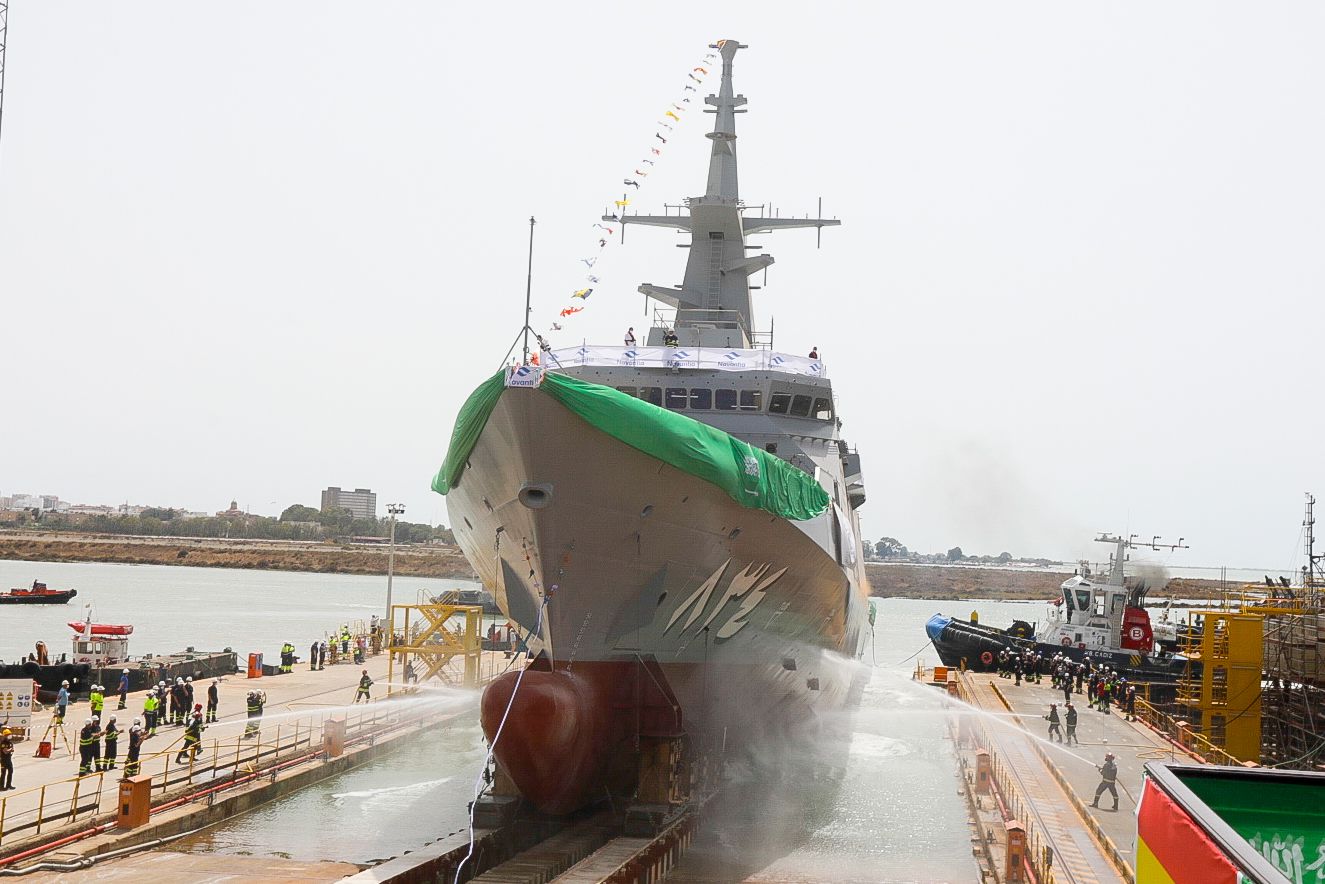 JAZAN enters the water for the first time. (Photo: Navantia)