“For As Long As It Takes”

US Defense Secretary Lloyd Austin stated that Western allies will continue to provide military assistance to Ukraine “for as long as it takes,” speaking to journalists after the third meeting of the Ukraine Defense Contact group on 15 June. The meeting resulted in “significant announcements” regarding fresh weapon deliveries to Kyiv.

Meeting to discuss Ukraine’s needs, as notified by Defense Minister Oleksii Reznikov, the US-led group of defence ministers from 55 countries came from around the world which, as Austin pointed out, shows how Russia “has horrified and galvanized the world.” After the meeting, Washington pledged an additional $1 billion in military aid, including MLRS guided munitions, 18 M777 howitzers and tactical vehicles, 36,000 rounds of 155mm ammunition, two additional Harpoon coastal defence systems, thousands of secure radios, night vision devices, thermal sights and other assets. Germany will also provide three MLRS and associated guided ammunition, and Slovakia will send Mil-series helicopters and rocket ammunition. At the same time, Canada, Poland and the Netherlands have discussed artillery donations.

Countries supporting Ukraine have been recently accused of loosening their grip on Ukraine, providing numbers of weapons well below what was requested, and delivering them too slowly. But Austin strongly defended those countries’ efforts, emphasizing they will “stay focused as long as it takes“. As for quantities, he explained that supplies are consistent with requests. “We are really focused on what the leadership believes is currently needed in this fight, and I think […] the international community has done a good job in providing that capability,” which will continue, he said.

And Chairman of the US Joint Chiefs of Staff, Gen Mark Milley, who co-chaired the press conference, used numbers to point out that supplies are, in fact exceeded requirements. “They asked for 10 battalions of artillery; 12 battalions of artillery were delivered. Again, I’d say 97,000 anti-tank systems. That’s more anti-tank systems than tanks in the world. They asked for 200 tanks; they got 237 tanks. They asked for 100 infantry fighting vehicles; they got over 300,” he said. And expectations over the time factor have been equally well met, he said. “The speed that we have delivered security assistance is without comparison. From the time the requests are validated and authorized, it is only a matter of days until the requirement is sourced, shipped, in the hands of Ukrainians“. 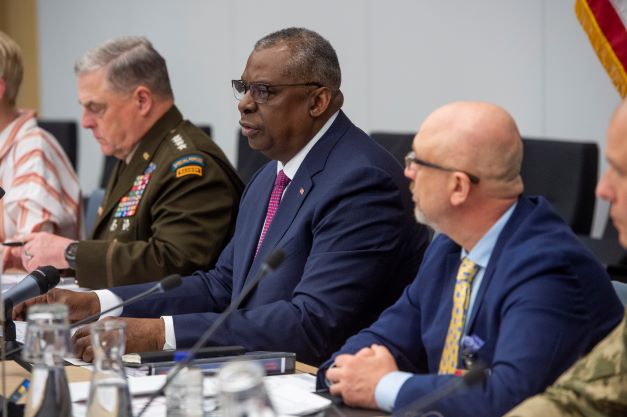 US Secretary of Defense Lloyd Austin and US Chairman of the Joint Chiefs of Staff General Mark Milley during the US-led Ukraine Defense Contact Group in Brussels. (via author)