“The world is a more threatening place now with more than 1,000 ballistic missile launches occurring globally every year,” observed Tom McCormick, VP of Lockheed Martin Space’s OPIR Mission Area. “SBIRS is the tip of the missile defense spear, seeing all those missiles and providing our military the ability to ensure our national security and the safety of our armed forces […] We designed our modernized LM2100 bus with our military customers’ changing, more-contested environment, in mind […] By adding enhanced resiliency features to the LM 2100, we created an initial ‘combat bus’ for the Space Force for even greater capability.” 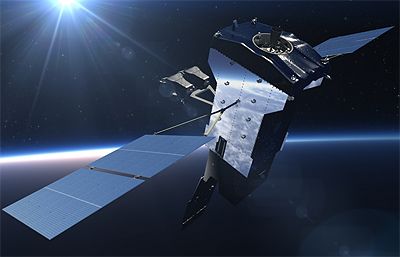 An artist’s rendering of the SBIRS GEO-5 satellite in operation. (Image: Lockheed Martin)