Eight Frigates for Indonesia, an Aircraft Carrier Design for Korea

Fincantieri has signed a major contract with the Indonesian MoD, valued at some €4.5 billion, for the supply of eight frigates – six FREMM-class and two ex-Italian Navy MAESTRALE-class, modernized. The contract also includes pertinent training and logistical support.

This is a distinct success for Fincantieri and further strengthens cooperation between the two countries in a region of increasing strategic importance. The FREMM design won over three competing bids: SIGMA-10514 (Damen), 30FFM (MHI) and the ARROWHEAD-140 (Babcock).

In total there are now on order or on option as many as 20 FREMM for foreign customers: 10 for the US, two (plus two) for Egypt and six for Indonesia, in addition to the 10 for the Italian Navy (eight delivered, two under construction). The first three FREMM for Indonesia will be built in Italy, while the second triplet will be built in Indonesia by PT-PAL shipyard (Java), to include the assembly of some components built in Italy. Also the refurbishment and upgrade of the MAESTRALE-class frigates will be carried out in Italy, as soon as the Italian Navy decommissions them.

On the same day, Fincantieri announced another contract, signed during the MADEX 2021 exhibition in Busan, Republic of Korea. The company is to support Daewoo Shipbuilding & Marine Engineering (DSME) during the Conceptual Design Phase of the new CVX-class aircraft carrier for the RoK Navy. The experience gained by Fincantieri during the design and construction of the LHD TRIESTE (32,000t full load, 245m), which will be delivered next year to the Italian Navy, is said to be the basis for the cooperation with DSME.

The Fincantieri Group is already active in Korea, through its subsidiary Seastema, participating in the construction of eight new DAEGU-class frigates (FFX-II) for the Navy, incorporating SEASNavy, an innovative integrated platform management system.

The CVX programme includes the Basic Design phase, starting in the second half of this year, with detailed design and construction to follow. The in-service date is anticipated for around 2033, supplementing the two DOKDO-class (LPX) amphibious aviation vessels. CVX will be a fully-fledged aircraft carrier with ski-jump, a full load displacement of about 40,000t and two islands, capable of operating a squadron of up to 20 F-35B STOVL aircraft and maritime helicopters. 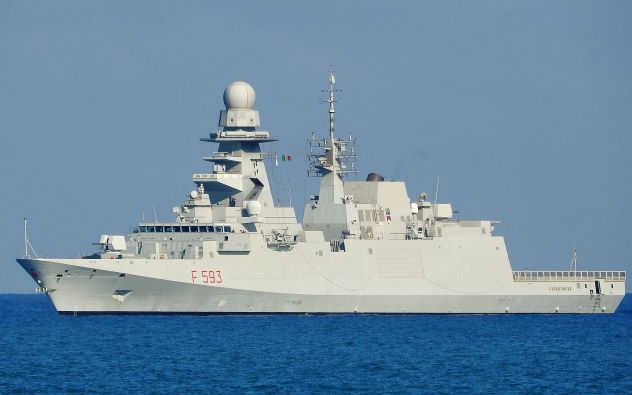 ITS CARABINIERI, an ASW-variant FREMM-class frigate of the Italian Navy. (Photo via author)