Looking to grow its business in Latin America, Leonardo (stand #B44) will be exhibiting a range of products at FIDAE 2018, which opens its doors on the 3rd April in Santiago, Chile.  Meeting the needs of the Armed Forces of Chile and other Latin American nations as well as those of commercial helicopter operators, Leonardo will be showcasing several of its rotorcraft for military and commercial customers including the medium-heavy three-engine AW101 and the single-engine AW119Kx helicopters.

An intermediate twin-engine AW139 helicopter operated by the Carabineros de Chile will be exhibited in its law enforcement configuration in the customers’ static display area. With over 20 helicopters in service in Chile including the AW119, AW109, AW139 and W-3A SOKOL models, and over 400 military and civil helicopters operational in the wider region, Leonardo is a major force in the helicopter sector. The company’s helicopters are used for a wide range of applications including naval roles, law enforcement and homeland security, emergency medical service, search and rescue, firefighting and disaster relief, utility, VVIP-VIP/corporate and offshore transport.

FIDAE 2018 will also host two Peruvian Air Force C-27Js, a type chosen by the customer for its ability to operate safely and efficiently from high altitude, unprepared airstrips in the Andes and from local airfields. One of the key roles of the C-27J is the efficient and cost effective delivery of humanitarian aid. “The C-27J allows armed forces to rapidly deliver aid, cargo and vehicles for emergencies, in all weather conditions, night and day, to any geographical location (including the Andes, the Antarctic and the Chilean Pacific Islands), all the while providing a high level of safety for the crew and passengers,” Leonardo says in advance to the show.

Leonardo has been present in Latin America since the 1930s, with its fixed-wing trainers present in the region since the ‘60s. All South American countries have operated Siai Marchetti or Aermacchi (both now Leonardo) trainers and fighter-bombers, used with great success in defence and security operations. Leonardo’s trainers meet requirements across the region and, “the new M-345 and M-346 Fighter Attack aircraft perfectly match the needs of several Latin American air forces due to their low acquisition and operational costs compared with other basic-advanced trainers and for their high performance versus other air policing/airspace control aircraft,” the company states.

Leonardo has contributed to the security of Chile by providing the armed forces with electronic systems and sensors. The company has delivered land communications equipment to Chile for many decades. To meet new net-centric requirements and to improve effectiveness of joint operations, Leonardo has developed new SDR (Software Defined Radio) communication systems for soldiers and tactical vehicle systems that will be showcased alongside the company’s hand-held IR camera. 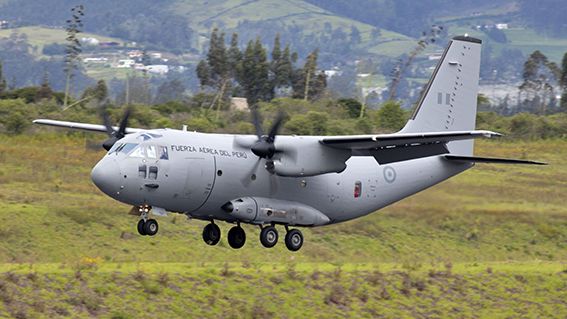