All Argentine Air Force Pampa IIIs to be Upgraded

The Argentinian Air Force has brought its newest aircraft to FIDAE. The Fabrica Argentina de Aviones ‘Brig San Martin’ SA (FAdeA) IA-63 Pampa Generation III Block II is a cost-effective fast-jet trainer and light attack aircraft. The first generation was based on the Alpha Jet and was developed in cooperation with Dornier (now part of Airbus) from 1979. The main improvements in the latest version are in the engine, a new, digital avionic suite, an integrated helmet system with head-up display, a new integrated navigation system as well as a digital weapon system and an improved data link. The Elbit Systems Embedded Virtual Avionics (EVA) system features as part of the modernisation. Shown at FIDAE are the EX-03 and EX-04 testbed aircraft. Ex-03 was the first Block II aircraft, handed over to the Air Force on 25 June last year. These are new-build aircraft – not upgraded, but all the force’s Pampa III are slated to be upgraded to the Block II standard.

The Block II allows crews to train in state-of-the-art air combat techniques, both in air-to-air and air-to-surface modes, the manufacturer says. This includes the use of modern guided weapons. In addition, virtual trainers can also be drafted in with the new system, serving primarily to improve communication between trainees.

Also presented at FIDAE is the IA-100 Malvina,  new basic training aircraft, which cannot be weaponised. The first flight was made in 2016, with a signed contract in 2020. 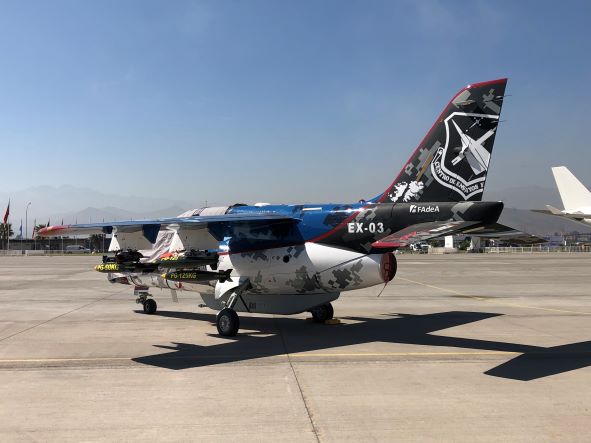 One of the Pampa III Block II testbed aircraft on show at FIDAE. (André Forkert)