A Return to Building Aircraft in Chile

Enaer and subsidiary DTS are showcasing the Pillán II project at FIDAE (see earlier MON report detailing some of the characteristics of the developing aircraft here). The project’s conceptual phase has been completed, with the instruction system operational and all now in readiness to begin the preliminary and detailed engineering phases and prototype development.

The aircraft project’s several sub-systems include a flight simulator, consisting of a cockpit, an instructor station and a mixed-reality visual system. Not only does this allow for procedural instruction, it also supports mission rehearsal, for military pilots to be trained under Visual Flight Rules.

The aircraft has been conceived as an evolved version of the T-35 Pillán, which prioritises aircrew safety. It is a two-seater single-engine aircraft in tandem mode, with the cabin resembling a combat aircraft equipped with the latest in avionics, enabling IFR flight. It has a new wing design, retractable tricycle gear, and an air conditioning system. Optional night and day surveillance systems can be added with real-time data transmission.

The Pillán II project brings with it implementation of state-of-the-art aeronautical technology and engineering in the national aerospace industry and, in turn, reinvigorates the manufacturing capacities currently extant in Enaer and in other national companies – leading to the ability to resume aircraft manufacturing in Chile after eight years.

The goal of the programme is to develop a small, very manoeuvrable single-engine trainer also capable of aerobatics. Designed as a two-seater and for initial and instrument training, it quickly became apparent that the predecessor T-35 met its requirements in an excellent manner, selling very well in South America and Spain – the Chilean Air Force, for example, replaced its old T-34 training aircraft with the more modern Enaer T-35 Pillán, completing delivery in 1990. Other military users are the Dominican Republic, Ecuador, El Salvador, Guatemala, Panama, Paraguay and Spain. 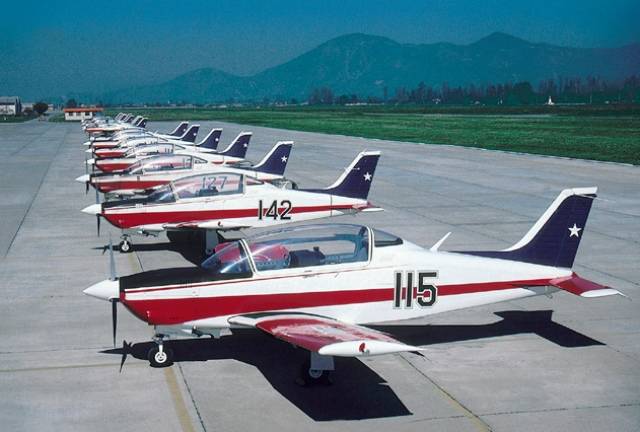 The T-35 Pillán has seen sterling service in Chile since 1990. (Chilean Air Force)