On 6 April, during FIDAE 2022, Embraer announced that the global A-29 Super Tucano fleet, consisting of over 260 aircraft, has now surpassed the 500,000 flight hour mark. The A-29 has been selected by over 15 air forces, including the USAF and those of Chile, Colombia, Ecuador, the Dominican Republic and the world’s leading operator of the type, Brazil.

“We are delighted to share this important milestone with the Chilean Air Force, our long-time customer,” said Bosco Costa Junior, VP of Sales, Embraer Defence and Security. “In addition to 500,000 flight hours, the A-29 has also accumulated more than 60,000 combat hours. In fact, it is the only light attack, reconnaissance and advanced training turboprop platform currently in production with proven combat capabilities worldwide“.

“Since the arrival of the first examples of this aircraft in 2009, the A-29 Super Tucano has stood out for its operational versatility, robustness and operating costs. I am grateful that Embraer has chosen FIDAE 2022 to commemorate this important milestone in the operational history of the Super Tucano,” added the Commander-in-Chief of the Chilean Air Force, Gen Arturo Merino Núñez.

Developed in response to the demanding requirements of the Brazilian Air Force (FAB), the A-29 Super Tucano can fulfil a wide range of missions, including light attack, aerial surveillance and interdiction, and counter-insurgency. It is robust, versatile and has the ability to operate from remote, unpaved airstrips at forward operating bases in hostile environments with minimal support, all with low operating costs and high availability (above 90%).

In addition to combat roles, the aircraft is widely used as an advanced trainer. Its ability to simulate combat missions and upload and download flight data has made it a highly effective training platform. As a genuine multi-mission aircraft, the A-29 is flexible enough to provide air forces with a unique platform for light attack, armed reconnaissance, close air support and advanced training, thus optimising their fleets.

It features a variety of state-of-the-art sensors and weapons, including an EO/IR system with laser designator, night vision goggles, secure communications and datalink package. Its systems enable the collection and exchange of time-critical information, and the aircraft can operate as part of a networked environment. 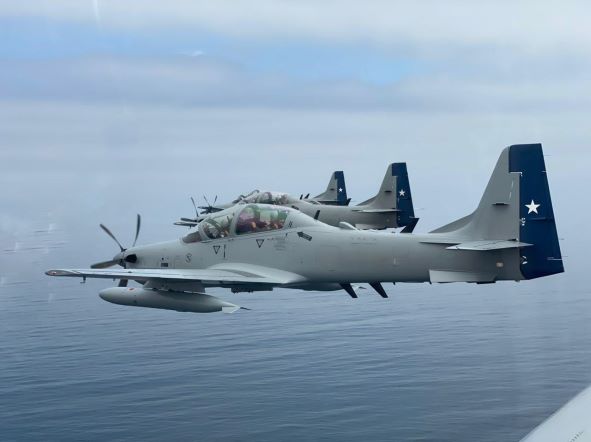 A-29 Super Tucanos of the Fuerza Aérea de Chile – the Chilean Air Force. (via author)