China North Industries Corporation (Norinco) is showing models of protected and armoured vehicles for a wide range of military and law enforcement missions at FIDAE this week.

The VN 1, also called ZBL-09, is the latest 8×8 wheeled platform, which entered PLA service around 2009. There are very different versions available, using the same chassis but with different turrets, effectors or sensors. The standard version mounts a 30mm cannon, 7.62mm machinegun and an ATGM  from the Red Arrow 73 family. As a PLL-09, it is armed with a Type 96 122mm howitzer, and as the ZTL-11 it sports a 105mm rifled gun. There are also  reconnaissance, artillery reconnaissance, communications, air defence, resupply and bridge laying versions. On top of that, there are export versions for Nigeria, Venezuela and Thailand, among others.

The VN18 (Type 05) is a tracked amphibious AFV in Chinese service. The standard version has the same armament as the VN 1: a 30mm cannon, 7.62mm secondary, and two rail-launched ATGMs. There are additional versions – including a 105mm system – and Venezuela is believed to be one of the export customers.

The VT4 model on display is a tank for export only, mounting a smoothbore 125mm main gun. MON understands first deliveries to have been made around 2017, with Thailand, Nigeria, Pakistan and others among the recipients.

The last model on display at FIDAE is the VN22, a wheeled 6×6 IFV. From the model, the turret seems to mount a 30mm cannon and a secondary machine gun. Also seen are sensors and effectors on the turret roof that could be a ‘hard kill’ protection system. The VN22 is brand new and currently available for export only, according to Norinco – although evaluation by the Chinese armed forces is apparently in prospect. Protection is apparently to STANAG 4569 Level 4, with additional protection kits available to raise this to 4a/4b. The vehicle is protected against mines up to 10kg, and features a 420kW diesel motor, offering a road speed of 110km/h and over 40km/h off-road, with range up to 800 kilometres. MON believes 105mm and 122mm turrets are also available. Secondary armament could include Red Arrow 73D and Blue Arrow 5 ATGM. Vehicle maximum gross weight is 24.5t, of which some 7t is accounted for by the turret. Optimum crew is probably 3+8. 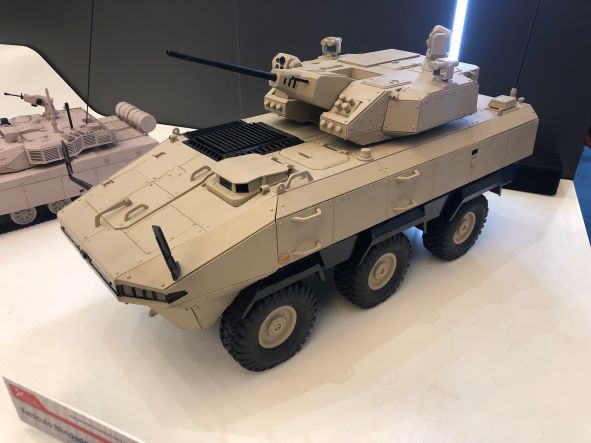