Personnel from Chile’s military and law enforcement special forces will be on hand during FIDAE to showcase some of their equipment.

The Army’s SOF Brigade consists of a number of special units capable of conducting unconventional operations in a wide variety of environments. The LAUTARO Special Operations Brigade consists of a Ranger-like unit, three commando units and a mountain combat unit – meaning the brigade as a whole is able to conduct a wide range of special operations, including irregular warfare, special reconnaissance (SR), direct action (DA), counter-terrorist (CT) and counterinsurgency (COIN) operations.

The diving units of the Navy’s SF Command can operate in coastal areas and on the high seas. They work closely on counterterrorism and transnational organised crime with USSOCOM Special Operations Command-South (SOCSOUTH), and other partner nations in Central and South America and the Caribbean. They also have close partnerships with other NATO nations.

In the aviation domain, the C-130 Hercules, CASA 212, Cessna C208, UH-1H Iroquois, Bell 412EP, A5532 Super Puma and MD 530F helicopters are on display. The forces also have access to S-70i Black Hawks and OHC6 300 Twin Otters of the Chilean Air Force. The CASA C-295 ACH and C-212 transport aircraft, in addition to the army components, primarily support navy special forces. They also have access to SH-32 Cougars, HH-65 Dauphins and BO-105 helicopters.

The Chilean SOF are pushing for an expansion of close air support through the acquisition of a light combat helicopter. MON understands both Boeing and MD Helicopters are bidding, with the AH-6i and MD 530G/540A respectively. However, the tender has been repeatedly postponed in recent years.

Ground vehicles on display include a UNIMOG U4000 and a protected HMMWV. A protected Renault Sherpa of the Carabineros (police SOF) is also on show – the vehicle serves as a personnel transport vehicle and protects against 7.62x51mm rounds. An assault ladder is mounted on the roof.

A tabletop exhibition of small arms shows, among others, the FN MINIMI machinegun in both calibres, the HK MP5, the FN Herstal PGM .338 sniper rifle, the LMT Defesa in 7.62x51mm calibre with a Schmidt & Bender 5-25×56 scope, as well as the ‘sniper rifle’ Barrett M82 in .50 BMG calibre with the Schmidt & Bender 3-12×56 scope. Other weapons on display include Saab’s Carl Gustaf and AT4. In addition, Chilean SOF use the ARAD assault rifle from Israeli Weapons Industries (IWI) in 5.56x45mm, with barrel lengths of 11 and 14.5 inches.

The T-10 round canopy ´parachute system and the TW9 freefall parachute from German manufacturer Paratec will be presented. In addition, there is a rebreather diving device as well as an underwater scooter for tactical divers on display. They are also showing a kayak with a sailing device and an RHIB assault boat M1585A from Chilean manufacturer PUMAR.

Sensors on display include the Hensoldt Spotter 60, VECTOR from Safran Vectronix and the CORAL CR thermal imager from Elbit Systems. In addition, there are monocular night vision goggles, red dot sights and the MOHAC helmet camera.

The majority of the skiing and climbing equipment on display consists of purely civilian products.

Also on display at FIDAE is the SKYBEAM counter-UAV rifle from Israeli company Skylock. This is used by police special forces. Interestingly, the RF sensors and the batteries are mounted on the plastic casing of an HK G36 rifle. When asked, users on site confirmed the easy handling and the high functionality of the system. 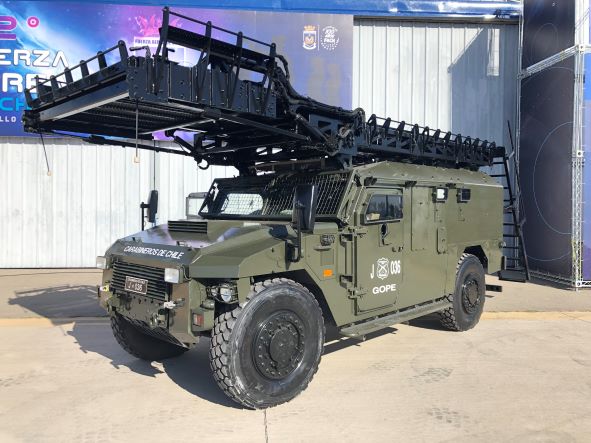