Drawing on its substantial presence in South America, Leonardo will highlight solutions in the aeronautics, electronics, helicopters and space sectors at Expodefensa in Colombia next week, seeking to strengthen safety and support economic growth in the region.

Latin America is a strategic market for Leonardo. The company has an established presence in many countries in the region, with around 400 helicopters operating today and 70 naval systems in use, as well as aircraft, primary and secondary radars for air traffic control and space solutions.

A key exhibit will be the M-346 Fighter Attack (FA) aircraft. Already delivered to its first international customer, the M-346FA is designed to carry out a wide range of missions at lower cost than front-line fighters. With features including Leonardo’s integrated GRIFO M-346 multi-mode fire control radar, the M-346FA can be employed as a tactical aircraft, while maintaining its advanced trainer characteristics. Its multirole nature represents an ideal solution for the needs of many armed forces in the region.

Also on show will be the C-27J SPARTAN multi-mission aircraft, already selected by Mexico and Peru. The aircraft is considered a real asset in boosting social inclusion, as it can reach the populations of remote areas. The C-27J Next Generation adds new avionics and aerodynamic elements, delivering greater operational efficiency and improved performance. SPARTAN is employed in a wide range of challenging operational contexts, from the Andes to Afghanistan. Its missions include military transport, paratroopers and materials, support troop tactics, special forces operations, humanitarian assistance and delivering support after an environmental disaster.

Alongside its tactical aircraft, Leonardo will be exhibiting: the ATR-72MP (Maritime Patrol), which combines the reliability and low operating costs of the ATR 72-600 passenger aircraft with a state-of-the-art mission system; the FALCO EVO, an ISR UAS; the guided DART (Driven Ammunition Reduced Time of flight) ammunition series; its VULCANO 76mm ammunition, which has a range of more than 40km; its Combat Management System, which can integrate and coordinate information from sensors in real time, providing full maritime situational awareness; SEonSE (Smart Eyes on the SEas), a geospatial platform for maritime safety created by e-GEOSand the e-GEOS braINT platform, which uses AI algorithms to provide intelligence analysis based on data drawn from a range of sources including drones and satellites.

Finally, the company will also be highlighting its AW139 helicopter, the VVIP configuration of which has been chosen in Colombia as the personal transport for the President of the Republic. 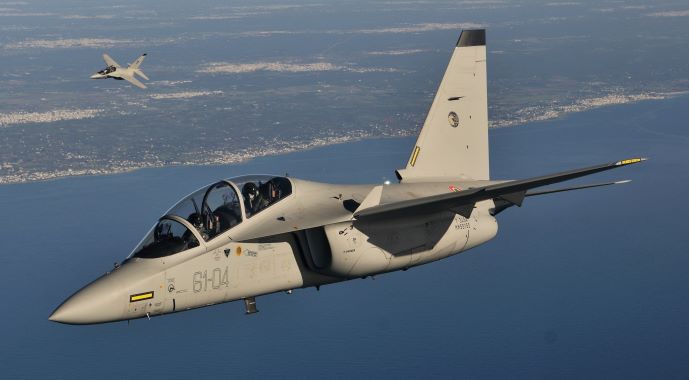 The M-346FA will form a major part of Leonardo’s exhibit at Expodefensa. (Photo: Leonardo)