Intended to Serve Both Civil and Military Operators

The Colombian Aeronautical Industry Corporation – CIAC – delivered the COELUM UAS to the Colombian Air Force (FAC) at Expodefensa 2021 in Bogotá on 1 December.

The unmanned system is aimed at both civil and military ISR applications over difficult-to-access terrain. “For us, it is a source of pride to be able to [confirm] that we have delivered a 100% Colombian development to the FAC, which generates a sense of belonging and legitimacy in the face of everything we have been developing. This product has high performance in aerial vigilance, a fundamental capacity to fight crime,” explained the Vice Minister of the Social and Business Defence Group, Carlos Ríos.

“The COELUM has capabilities that allow it to increase its efficiency, it was tested on San Andrés Island by the Colombian Air Force and with only 50% of the battery we flew 70 minutes, since its large wing design allows us greater lift. In addition, the system has the ability to reduce power to extend the endurance. It was also tested in Combat Air Command No.2, we operated for about 95 minutes with a linear route of 80km. It is a capacity for rapid deployment,” stated Maj Andrés Mejía Loaiza, Coordinator of the Development Design Group and Director of Production at CIAC.

“This product is designed to work jointly and in coordination with the Police and the Army, sharing information. The primary use that is going to be given is to specifically support the Police in urban areas of cities, facilitating control, surveillance, security and information in real time,” added Maj Gen Henry Quintero Barrios, Commander of Support Command at the FAC.

The COELUM programme began in 2018 as a detailed concept study, with operational tests of the first prototype conducted the following year. 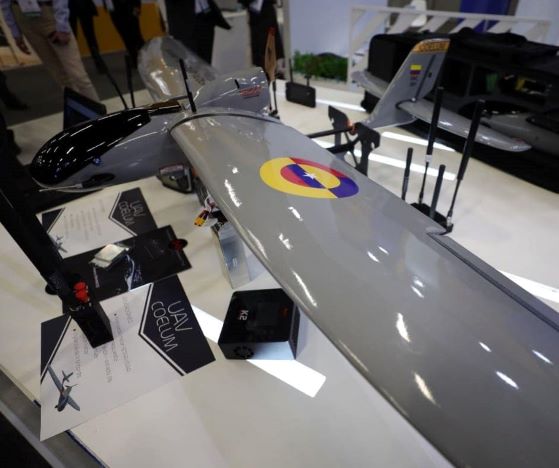