Rheinmetall and Nexter Square Off in Main Armament Stakes

Rheinmetall presented its new KF51 PANTHER main battle tank on the first day of Eurosatory. This has the 130mm smoothbore gun from Rheinmetall integrated, and is to follow the current 120mm smoothbore main armament of the LEOPARD 2. The larger calibre is necessary in order to be able to penetrate the new protection systems of potential enemies at greater distances and with more certainty. The Russian T-14 ARMATA is, of course, in view.

NEXTER goes one step further here. As a world premiere, ASCALON, a 140mm cannon including the corresponding ammunition, was shown at the fair for the first time. NEXTER sees this as the main armament for the Franco-German MGCS (Main Ground Combat System). ASCALON stands for Autoloaded and SCALable Outperforming guN – and the weapon is based on developments that the French have been pushing ahead with since the 1990s. Prototypes already existed, but the system has now been completely reworked for MGCS.

One aim of the new system is to achieve a significantly longer range. Details have not yet been disclosed, but it should be possible to double the effective range – according to Nexter, 5,000m or more. With the gun comes a fully automatic loading system, with which Nexter already has considerable experience in the Leclerc MBT. For many nations, however, the fully automatic systems are still too slow, so an adjustment must be made to be effective in the future. The new ammunition will be able to build up more pressure and should be able to hit a target at 2,000m after only 1.5 seconds. Nexter sees a lot of growth potential in the new system overall.

The 140mm gun has a length of 7.3m and weighs about 3,000kg. Nexter wants to have an adapted and firing prototype ready for further testing in 2023. 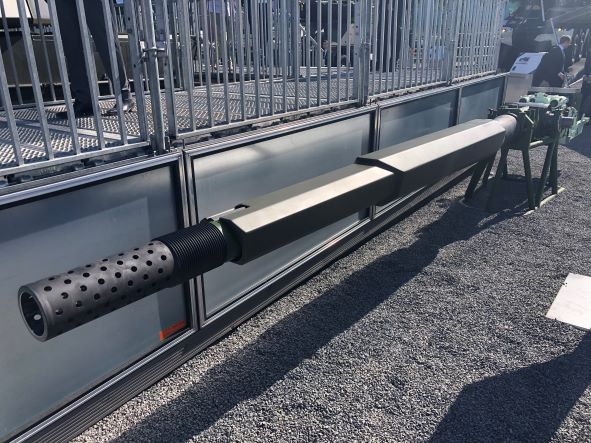 The Ascalon at rest at Eurosatory. (André Forkert)