When you have a product line, a breadth of market and a deep well of experience, expertise and knowledge as great as those possessed by Rheinmetall, it is impossible to compress a sensible, all-embracing message into an announcement shorter than the Treaty of Pilnitz! Nonetheless, the company has made a valiant effort below to highlight some of the more alluring aspects of its presence at the biennial exhibition in Paris next week – a presence that will be the largest the company has ever had at Eurosatory.

Innovations on show at Eurosatory include:

In addition to these debuts, Rheinmetall will also highlight a number of other products and projects:

Air defence: mobile, modular, and scalable, ground-based air defence systems are gaining new importance and Rheinmetall will display a Boxer 8×8 configured for air defence, with the Sykranger 30 turret and an integrated SAM missile launcher. Also on show will be the Skynex air defence system, consisting of a 35mm Mk3 Revolver Gun, Multi Sensor Unit with AESA radar, and a Control Node 1 command centre, with a high-energy laser functioning as a future effector;

Digitized battlefield: with all the knowledge necessary for networking multiple entities on the digital battlefield of the future, Rheinmetall will show how the interplay of sensors, effectors and human-machine interfaces can lift the ‘fog of war,’ and will also be showcasing the current configuration of its Gladius 2.0 soldier system, demonstrating how it can be networked with manned and unmanned vehicles and subsystems;

As if all this were not enough – Rheinmetall will also use the opportunity afforded by the return of the Eurosatory live event to showcase its comprehensive expertise in practically every other capability category: weapons and ammunition for threat-commensurate, scalable application of force; innovative, networkable sensor systems for applications on land, at sea and in the air; and high-performance simulation technology for top-of-the-line training. 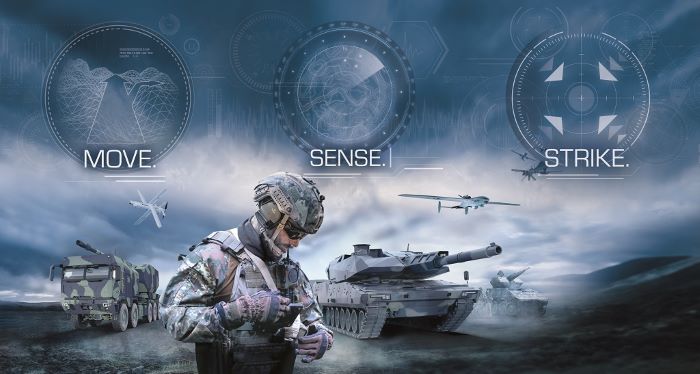