Nexter Arrowtech, grouping Nexter Ammunition, MECAR and SIMMEL Difesa will jointly present new solutions to delegates at Eurosatory, 13-17 June, in the wake of high-intensity conflict ‘at the gates’. War in Ukraine has finally shaken European nations into wakefulness – underlining the realisation that ammunition stocks matter.

Nexter Arrowtech possesses the capability to respond to urgent requirements, and to recover part of the ground lost over the last 15 years. However, the group’s managing board agrees with the general demand being voiced by industry for more consistent, long-term governmental planning in procurement programmes. As far as ammunition is concerned, constant demand over time is considered preferable to huge orders that overstretch production lines –leaving them empty after fulfilment.

In terms of products, Nexter Arrowtech is also not unprepared. In addition to its large portfolio, the company will come to Eurosatory with new proposals and milestone achievements to speak of.

The spearhead of the offer is based on its family of 155mm field artillery ammunition. The current portfolio includes three propellant systems, three HE shells, five illumination and smoke rounds, and three precision munitions. At the exhibition, the focus will be on the BONUS MK.2 and KATANA guided munitions.

BONUS MK.2 is an anti-tank fire-and-forget precision-guided shell, aimed at long-range engagements up to 35km for 155/52mm howitzers, and 27km for 155/39mm howitzers. Each round carries two sensor-fused attack modules, each featuring a shaped charge. Guidance is assured by an IR sensor that drives each module to a top-attack profile for target vehicles. Each round can potentially engage two targets. BONUS MK.2 is already successful in the market, with over 13,000 rounds delivered and more in production. In addition, discussions are in progress to create a new sub-variant dedicated to different targets.

KATANA is a guided munition intended for high-value targets, light armoured vehicles, and concrete walls. It features a 6kg explosive warhead and is ideal for point targets in asymmetric conflicts as well as in urban warfare scenarios. According to the company’s figures, a single round could spare 20-40 unguided rounds for a high-value static target at a 40km range. Each KATANA round comes as a 45.6kg 155mm round featuring an IMU/GNSS guidance system (compatible with both GPS and Galileo), with nose and tail fins. The system is under evaluation, and test firings will validate the fact that the ammunition is robust, reliable, and safe to use. Series production is envisaged starting in 2023.

In addition to artillery, anti-tank systems have been gaining popularity recently. Nexter Arrowtech’s short-term response is based on the 120 SHARD (Solution for Hardened ArmouR Defeat) 120mm tank round, the APFSDS-T variant of its 40mm CTA cannon, the MECAR-produced 30mm APFSDS round, and 84mm munitions for CARL-GUSTAV recoilless rifles (M2 and M3, with qualifications underway for the M4).

In the longer run, the company is stepping up its commitment to the ‘Project 140 ASCALON’ for a 140mm tank round to be mounted on the future KDNS ‘European’ MBT. The final choice of whether the future tank will mount a 130mm or a 140mm cannon has not yet been made. Nonetheless, Nexter Arrowtech’s 140mm round is currently at technology readiness level (TRL) 4 and continuing development envisions major capability demonstrations in 2025 (equivalent to TRL6). The starting point is the APFSDS munition, a 1,300mm -long round promising superior firepower with margin for evolution. Meanwhile, new technologies for HE, NLOS, and TP rounds will be validated.

Italian subsidiary SIMMEL Difesa supports the entire group’s product range with its proprietary high-performance propellants for land and naval applications, as well as with its ground-breaking FB-375 MK.2 multifunction artillery fuze. The company is also known for its Pre-Formed Fragmentation (PFF) warheads and its naval proximity fuzes. At Eurosatory, SIMMEL will illustrate the full compliance of its products with EU’s REACH standard on reduced toxicity (to enter into force in 2027), thus anticipating client needs and allowing them to purchase right now for the medium term. 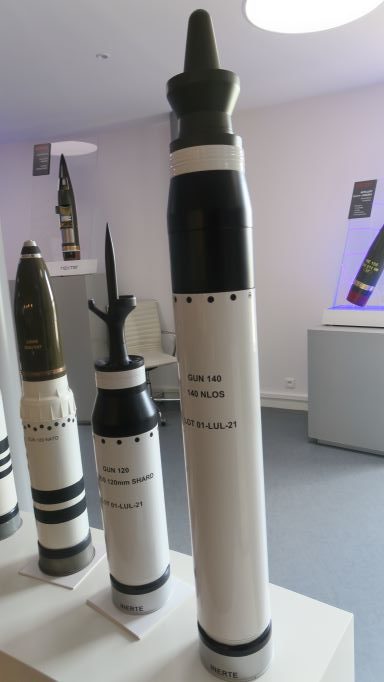 The various brands of the Nexter Arrowtech grouping will showcase a variety of complementary innovations at Eurosatory. (Nexter)