The French remote weapon systems manufacturer Hornet and Europe’s leading developer of robotics and autonomous systems Milrem Robotics exhibit the THeMIS Combat Unmanned Ground Vehicle (UGV) equipped with the HORNET Remote Controlled Weapon Station (RCWSin Paris-Villepinte. The HORNET RCWS was developed for the new French 4×4 and 6×6 “Scorpion” armoured vehicle programme; however, it offers unique features for UGV applications. One of these is a specific cleaning system for the optronics as well as the option to flip down the sensors to protect them from dirt and damage. The second is a protected ammunition feed.

“These are crucial aspects for an unmanned vehicle operated from a distance,” explained Jean Boy, Managing Director of Hornet, adding that the HORNET was developed keeping in mind the French Army’s high standards for firing accuracy.

“Hornet is a new generation remote weapon system which has exceptional features making it especially suitable for unmanned operations. The autonomous THeMIS is a very stable and extremely capable mobility platform that makes this combination a valuable asset for different military operations,” said Kuldar Väärsi, CEO of Milrem Robotics. “Adding this THeMIS Combat to even small military units, increases their firepower and capabilities tremendously.” 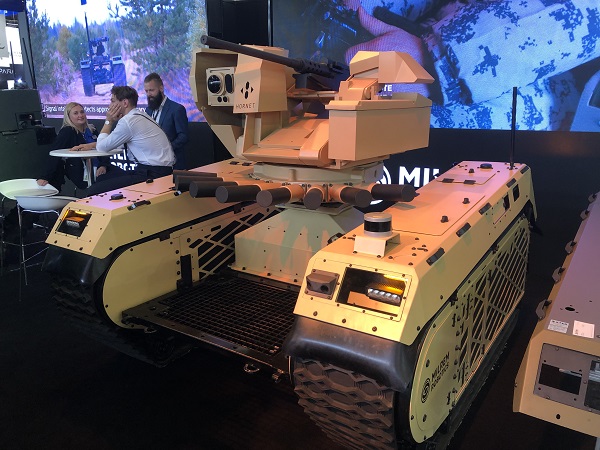