From C4ISR to AFVs, Munitions and Training Systems

Focusing on new capabilities to protect forces in the field, Leonardo will showcase a range of technologies at Eurosatory 2022 – from C4ISR solutions to cyber defence. A key highlight will centre on a new anti-drone technology that doubles as a short-range air defence radar.

The TMMR AESA radar, when combined with the NERIO EO camera system, provides an effective C-UAS solution, but also does duty as a short-range air defence or surveillance asset. Static and mobile versions of the Kronos radar will also be on display – the benchmark for air surveillance and defence, with some 50 units currently in service globally.

Military communications systems from the SWave SDR family will be on show, including handheld radios – tens of thousands of which have been sold worldwide – and portable and vehicle-mounted radios. These technologies allow for interoperability of ground forces, especially in combined multinational operations.

Leonardo is also at the forefront when it comes to meeting the latest requirements for medium armoured vehicles and will present its latest technologies on board the 8×8 Centauro II wheeled vehicle, together with an integrated range for upgrading tanks already in service, such as the
M60. An example of this is the HITFACT MKII large-calibre turret installed on the Centauro II.

Eurosatory will also feature: military vehicle stabilisation and navigation systems by GEM, a company in which Leonardo recently acquired a 30% share; the Vulcano family of guided munitions, one of the most innovative technologies in the world; and the Type 163 laser designator, a high-energy system that has been field-tested, with over 800 units already supplied to 27 countries, including many NATO members.

Finally, Leonardo will be presenting an immersive reality solution that simulates highly realistic operational environments, which can also be used for training activities. 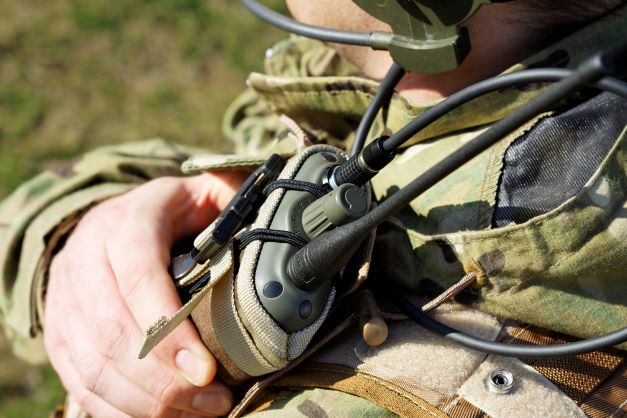 The SWave series of software-defined radios will be among the many products and solutions showcased at Eurosatory. (Leonardo)