When it comes to talking about unmanned and autonomous vehicles in a European context, the name Milrem Robotics has become practically ubiquitous over the last couple of years. And that ‘tradition’ will continue to be evident at Eurosatory – with no less than eight of the company’s THeMIS intelligent robotic systems on display – two on the company’s stand, one in the live demonstration area and five on the stands of various partners.

THeMIS Combat UGVs will be shown with weapon stations integrated by partners at the top of their respective fields – EOS, FN Herstal, Hornet, Kongsberg and Nexter. In addition, the company will show its autonomous THeMIS Observe UGV, intended for ISR missions, which is also integrated into Milrem Robotics’ C2 system. One of the vehicles features an electro-optical targeting system and is displayed on Krauss-Maffei Wegmann’s stand, and another – the Route Clearance UGV – on CNIM’s stand.

“The THeMIS is the world’s most fielded autonomous UGV in its size class, having been acquired by 13 countries, eight of which are NATO members. THeMIS has experience from hot Mali to arctic Norway to some jungle regions with extreme humidity,” said Kuldar Väärsi, CEO of Milrem Robotics. “Having eight vehicles at Europe’s leading defence exhibition with various payloads by world-leading companies illustrates the versatility of the platform and is a huge compliment.”

Additionally exhibited during the event is the Type-X Robotic Combat Vehicle, equipped with Kongsberg’s Protector RT40 and the Straight Obstacle Blade from Pearson Engineering. 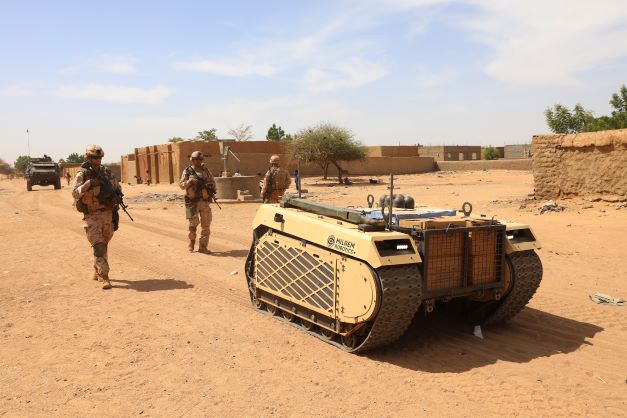 THeMIS was subjected to a full year’s worth of extremely rugged testing with Estonian troops in Mali. (Milrem)