Basis for Bid for VBAE Programme

Arquus displayed a variant of the Scarabée light armoured vehicle configured for the reconnaissance and tank-killer roles at Eurosatory.

Intended for reconnaissance, scouting and combat, the baseline Scarabée also constitutes the basis for the company’s bid for the French Véhicule Blindé d’Aide à l’Engagement (VBAE – Armoured Engagement Support Vehicle). This programme seeks to complement the capabilities of the French Army’s VBLs, and to provide partner European armies with light armour capabilities. Arquus has already started working on VBAE, crafting ideas, concepts and technologies, as well as finding European partners. The company is also a participant in the FAMOUS initiative, sponsored by the European Defense Fund and coordinated by Patria, in which 19 companies are engaged in a two-year study to consider, assess and discuss ‘European Future Highly Mobile Augmented Armoured Systems’.

The Scarabée on display at Eurosatory was configured with an Akeron Hornet RCWS, incorporating MBDA’s rebranded missiles and a 12.7mm machinegun. Recent combat experience has shown the continuing essential nature of anti-tank capabilities and the RCWS incorporates the missiles on the side, maintaining the compact silhouette and contributing to the vehicle’s low observability. In this respect, Arquus suggests, it is reminiscent of the VBL Milan, while adding several new operational capabilities. Depending on vehicle configuration, the Scarabée will carry up to five Akeron missiles.

In a direct response to feedback, the earlier sliding doors have been replaced with conventional closures, offering better crew protection in dismounted combat. The air assault and combat variant presented earlier had conceived of sliding doors to enhance the vehicle’s compact nature and facilitate air transport. The Scarabée is also fitted with brand-new cameras from Bertin, offering unique night vision and driving capabilities. Paired with the fully-electric mode, which offers extremely silent mobility and a low thermal signature at low speed, these capabilities redefine the Scarabée as being very well adapted to night combat – further enhanced with the use of collaborative combat modes. New Michelin tyres further increase stealth and minimise footprint.

The jewel in Arquus’ crown, Scarabée is the first military hybrid-drive armoured reconnaissance platform. Compact, highly mobile and stealthy, it can tackle any environment, from desert combat to confined or urban environments. Versatile and modular, it can serve as a reconnaissance car, a light cavalry vehicle fitted with a powerful autocannon, a missile-enabled tank killer or a mobile command post. It can conduct missions in air assault units or quick reaction forces, accompany infantry units, or pair up with heavy armour formations. 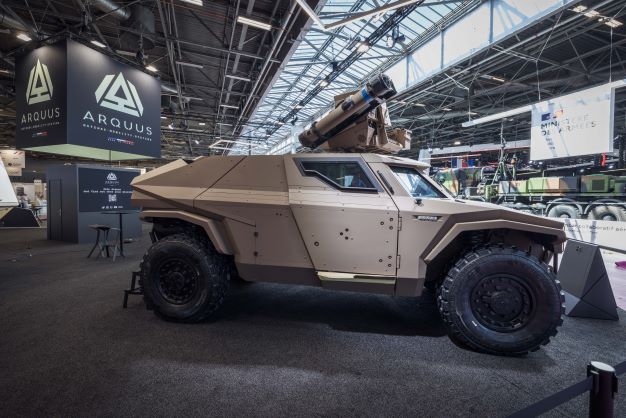