Eurosam to Refurbish ASTER for Italy and UK

OCCAR signed a contract with Eurosam – the MBDA/Thales consortium – on 9 July to provide a mid-life refurbishment of the nations’ ASTER missile inventories. The agreement follows one signed in January last year for French missiles.

The contract will ensure optimal efficiency of the systems deploying ASTER and follows three successful firings during NATO’s Formidable Shield 2021 air defence and anti-missile exercise, conducted off Scotland in May. ASTERs at sea are deployed by all three navies; SAMP/T, the land-based variant, has been operated by France and Italy since 2011, providing 360° coverage over areas of up to 15,000km2, and ranges of up to 50km horizontal and 20km vertical.

Earlier this year, a new generation of SAMP/T – SAMP/T NG – was ordered by France and Italy, for delivery from 2025. SAMP/T NG will ensure protection against new challenging threats and allow implementation of new operational concepts. This system will notably features a new 360° multifunction radar fitted with a rotating AESA antenna, plus an enlarged ASTER family, including an enhanced missile: the ASTER Block 1 NT (new technology) with a new seeker and a new computer, able to face new emerging threats. The new system will feature a radar detection range exceeding 300 km and an intercept range of 150 kilometres.

ASTER missiles for naval or ground-based air defence systems are also in service with several other armed forces. The family comprises: ASTER 15 – for short- to medium-range air defence; ASTER 30 – for short- to long-range defence. Both variants are vertically launched and autonomously guided, to provide optimal solutions for saturating attacks. ASTER missiles provide ships with an all-round anti-missile and anti-air capability, to ensure self-defence and consort protection. In addition, ASTER 30 also provides a long-range interception capability for area defence. 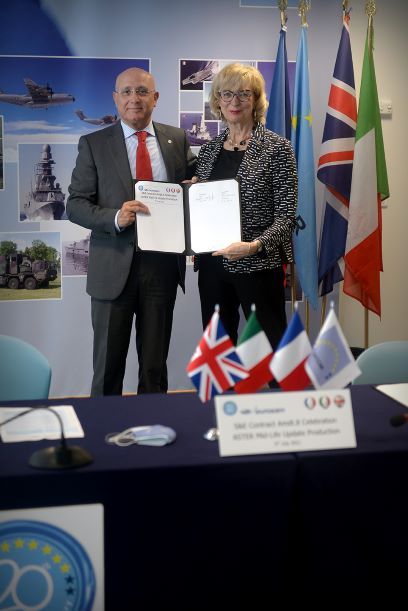