Rafael sits with MONCh to discuss its latest unveiled systems

At Eurosatory 2018, MONCh sat down with Giora Katz, EVP Marketing at Rafael Advanced Defense Systems, to discuss about the four other products launched at the same time as FIRE WEAVER (story here) during the show in Paris.

Amongst those is the FIREFLY miniature electro-optical tactical loitering munition designed for light manoeuvring ground forces such as infantry, Marines or Special Forces fighting in the complex battlefield of an urban environment.

“The concept of FIREFLY was initially designed by a soldier who fought in the trenches during the Battle of Ammunition Hill, and who thought that the battle would have been fought more easily if the Israeli forces had at their disposal weapons that could fly over to the enemy posting,” Mr Katz told MONCh.

FIREFLY features a dual seeker, target tracker, homing algorithms, computer vision, Safe & Arm fusing mechanisms and Human Machine Interface, it weighs 3kg and comprises a weapons system kit that includes three miniature loitering munitions and a control unit.FIREFLY has an abort/wave-off capability and full, safe returnability to the operator up to attack command. It can be operated day and night, and has low visual and acoustic signature. “It can also be used without the loitering munition for simple reconnaissance if necessary,” another Rafael spokesperson told MONCh. According to Rafael, extremely high quantities (in the 1,000s) have already been sold to an undisclosed client.

During this year’s Eurosatory Rafael is also launching the I-DOME, that is, the mobile version of the company’s IRON DOME. IRON DOME is a dual mission counter rocket, artillery and mortar and Very Short Range Air Defence (VSHORAD) system, which enables quick detection, discrimination and interception. “With I-DOME, the company has sought to replicate this technology at the level of a vehicle in order to protect expeditionary forces moving into dangerous grounds,” Mr. Katz told MONCh.

Finally, Rafael’s stand also includes a display of EPIK (Electro-optical Precision Integration Kit) mounted on a rocket. “This system enables the transformation of a ‘dum’ rocket into an intelligent weapon,” Mr. Katz noted.

Combining Rafael’s EO and Signal Processing capabilities of Scene-matching technology, EPIK is designed to integrate in simple fashion to unguided rockets ranging from 122mm to MLRS or GMLRS variants in order to extend the range of the rocket up to 50% and increase precision to 3 metres. Its main advantage is that it does not use GPS to guide the projectile to target. 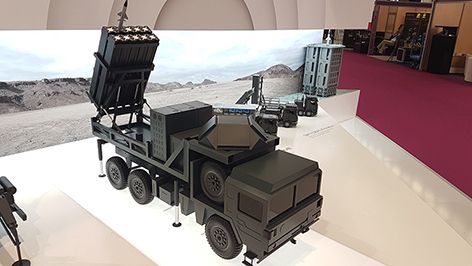