Alliance For ESSOR Gets EU Funding For New Waveforms

Alliance for ESSOR (a4ESSOR), a joint venture developing secure software-defined radio (SDR) technology for a number of European partner nations, has signed a contract with OCCAR to develop a number of new SDR capabilities. The deal has received funding from the European Defence Industrial Development Programme (EDIDP).

The new work – dubbed ESSOR New Capabilities (ENC) – will work to develop three new waveforms. While the term ‘waveform’ can refer simply to the graphical representation of a radio wave, in SDR projects it is used more widely, and denotes the entire system of exchange by which radios are linked. As well as developing the new waveforms, the project will enhance the existing ESSOR framework, within which waveforms are managed throughout their life cycles.

The three new waveforms to be developed are ESSOR NBWF, ESSOR 3DWF and ESSOR SATCOM WF. These refer, respectively, to narrow-band, 3D and satellite communications waveforms. The consortium has already developed one waveform – ESSOR WBWF (wide-band waveform). The WBWF and NBWF find their applications primarily in the land domain, while 3DWF will handle air-ground-air communications. A key part of the ENC project will be to ensure that all waveforms will be interoperable, enabling partner nations to benefit from more secure communications and easier interaction between users with different radios. 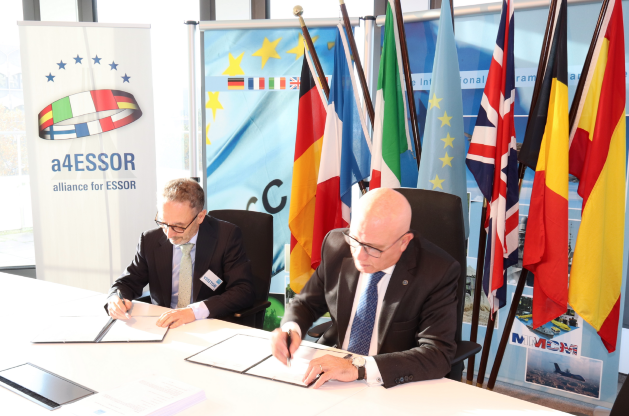