The Baltic Air Policing (BAP) mission is a NATO air defence Quick Reaction Alert (QRA) with the objective of protecting the airspace over the Baltic states of Estonia, Latvia and Lithuania. A lack of financial means to sustain the combat air forces needed to patrol Baltic airspace has forced these nations to seek external assistance.

Since they joined NATO in March 2004 the task has fallen to a rotating mix of aircraft from NATO members, based out of the First Air Force Base at Zokniai/Šiauliai International Airport in Lithuania. From 2014 that location has been supplemented by the Ämari Air Base in Estonia and rotations, initially conducted on a three-month basis, have now been extended to four. Usual deployments consist of four fighter aircraft with 50-100 support personnel. Belgian Air Force F-16AM FALCONs were the first aircraft to conduct the 24/7 BAP mission, with effect from 30 March 2004.

Germany is now in its eighth BAP rotation, beginning on 31 August when it took over from a quartet of Royal Air Force Eurofighter TYPHOONs. Luftwaffe (German Air Force) TYPHOONs (from TLG 74 in Neuburg an der Donau, which is in its fifth BAP rotation) operating from Ämari and French MIRAGE 2000-5s from Šiauliai (which took the role over from Portuguese Air Force F-16s) will share responsibility through January 2017. An additional aircraft is being kept on 96-hour standby in Germany. BAP operates under the auspices of the Combined Air Operations Centre (CAOC) in Uedem in Germany and the aircraft maintain a 24/7 QRA Interceptor capability throughout their deployment. German troops are rotated on a 4-6 week basis, with only key personnel staying deployed for longer periods. Pilots are able to prepare for BAP in their simulator at home, in which the Ämari AFB and its surroundings are available.

As the end of deployment looms, the German contingent at Ämari can reflect on what it has achieved. First, a significant number of Tango (training) missions, averaging 75mins, including joint missions. Second, 28 A-SCRAMBLE missions since early September, responsibility for which alternates between the air policing detachments stationed in Lithuania and Estonia. Typically, the German TYPHOONs have been airborne with 10mins from the alert – NATO requirements are for 15 mins – and a turnaround time of one hour once recovered to base, during which time the aircraft have to be checked, refueled and re-armed as necessary, ready for the next mission.

The Luftwaffe TYPHOONs fulfil nearly the same task as at home and carry nearly the same weapons fit: the Mauser BK-27 gun, two IRIS-T infrared missiles (Diehl BGT Defence) and two AIM-120 AMRAAMs (Raytheon,) with the latter scheduled to be replaced by the MBDA METEOR. They also carry two external tanks and the integrated self defence and countermeasures suite, plus a GoPro camera and a backup camera for visual identification of unknown aircraft – BAP’s primary mission. Pilots also have night vision goggles on their helmets.

Normally, missions consist of two aircraft, which more often than not encounter Russian transport or reconnaissance aircraft en route from the mainland to the Kaliningrad enclave. Previously, larger formations had been used, but no longer, under current mission parameters. One pilot attested to the non-aggressive behavior of Russian pilots and to the fact that all recent encounters have been in international airspace. Lt.-Col. Ülar Lohmus, commander of the Ämari air base, has a slightly different view: there have been 181 safety incidents in 2016 (293 in 2015) and 11 border violations (2015:3.)

Consisting of around 140 personnel, the German TYPHOON detachment includes seven fighter pilots and 70 to 80 maintenance operators. German contingents are always larger than other those of nations, including, for example, Military Police and a medical support team with an aviation medical examiner. Questioned as to the availability of TYPHOONs during their stay at Ämari, this was described as excellent, German personnel indicating that availability achieved during the mission had been up to 90 percent. The extended spares kit that accompanied the detachment has proven to be adequate and in the limited number of cases in which this fly-away kit did not suffice, additional equipment was requested from one of the air force’s logistics centres. Parts were then flown in by one of the Luftwaffe’s C-160 TRANSALL cargo aircraft or by civilian air transport. Germany did not opt for full performance-based logistics support from the EUROFIGHTER consortium, keeping a fair share of TYPHOON-related MRO activities in-house. If really necessary, spare parts can be flown in within 12-24 hours, though the normal timeline is three to four days.

According to the pilots, TYPHOON is very easy to fly, its huge power – more than other NATO or opponent aircraft – meaning they can outmaneuver and be ‘on top’ of the opposition. “We can outclimb a lot of other airplanes,” one German pilot told Mönch in December. Auto-trim and the situational picture that comes through Link 16 – which means the aircraft radar can be switched off – helps the pilots concentrate on tactical issues. They normally reach their operating altitude within two minutes of takeoff.

Growing Pains for Ämari Air Base

Estonia had long lobbied NATO for fighter aircraft to be deployed to its territory in the same way it had seen how the air policing mission was being conducted at Lithuania’s Zokniai/Siauliai air base. A former Soviet base that housed Su-24 FENCER fighter bombers, Ämari was re-established as an air base by the Estonians in May 1997. Since then,it has been thoroughly overhauled with modern infrastructure being built, partly funded by NATO.

The air base, which provides 24/7 support for the QRA as well as host nation support, can accommodate 12-15 combat and four transport aircraft, most of which remain outside – there are only four heated hangar ‘slots’ for the QRA. It also has a passenger terminal, handling up to 2,000 passengers or 1,000t of cargo in any 24-hour period.

The US administration has decided to invest US$24 million in the base, so a new maintenance hangar, a 200-bed dormitory, a hot cargo pad, a squadron operations centre and a larger fuel depot with pipelines are likely to be built in coming years.

NATO forces, including US troops, conduct a lot of exercises from Ämari, including air-to-air and air-to-ground operations as well as support of land forces and paratrooper drops.

At Šiauliai, Royal Netherlands Air Force F-16 will take over from France in January, starting NATO’s next BAP rotation. Germany will remain at Ämari air base, replacing TLG 74 with the ‘Richthofen’ TLG 71 from Wittmund. This will be primarily a change in personnel, since the deployed TYPHOONs will remain in place and be handed over to their new operators. During 2017, the TYPHOON will be at the fore of this specific air policing mission, with similar aircraft serving from both Britain and Germany.

The TYPHOON will remain on guard for some time, potentially seeing many rotations. It is in service with six customers and ordered by two more. The aircraft has demonstrated high reliability across the globe in all climates and continues to do so – in Ämari it has been flown in heavy, windy weather and with a lot of snow, the latter circumstance being a new experience for the German crews.

According to industry, the capability enhancement programme is making good progress. Through a series of iterative steps, new capabilities are being added to the aircraft, with test and integration activities currently underway for the advanced METEOR BVRAAM, the STORM SHADOW precision guided cruise missile and the BRIMSTONE precision attack missile. The integration of these weapon systems will ensure TYPHOON maintains its position as a very capable, agile and reliable swing-role fighter. There are around 500 aircraft across Europe, providing air superiority (max. speed Mach 2.0 and max. altitude over 55,000ft,) advanced sensor capabilities and combat-proven air to surface capabilities.

Project CENTURION for the RAF TYPHOON fleet is under way, transitioning TORNADO capabilities to TYPHOON by the end of 2018. The Phase 1 Enhancements Further Work (P1Eb FW) upgrade, which provides additional human-machine interface technologies and additions to the aircraft’s air-to-surface targeting capability, has completed operational evaluation with 41 Test and Evaluation Squadron at RAF Coningsby and is due to be declared operational in early 2017. The next phase of Project CENTURION will be the delivery of Phase 2 enhancements, with the initial integration of the METEOR and STORM SHADOW. The Phase 3 enhancements will include final integration of STORM SHADOW as well as introduction of the BRIMSTONE close air support capability.

Spain is integrating a digital IRIS-T version. METEOR will undergo further firing trials next year to expand the clearance envelope of the weapon, bringing an unparalleled air-to-air engagement capability to TYPHOON, with multi-shot BVR air superiority and high persistence against long range maneuvering targets. The integration of METEOR will continue as part of the contracted Phase 2 Enhancement package. Customer operational evaluation and training will take place during 2017, after completion of the Phase 2 enhancements.

The E-Scan Radar CAPTOR-E has completed ground tests on IPA5, using the aircraft systems to detect and track airborne targets at ‘significant range,’ and moved into flight testing in July this year. A second test aircraft, IPA 8, operated by Airbus Defence & Space, has also joined the E-Scan flight test programme, and remains on track to meet the contracted programme deliverables. The CAPTOR-E radar and weapons system capability will be incrementally enhanced over the next three years to enable the required capability (P3E Standard) to be available for first deliveries to the Kuwait Air Force. 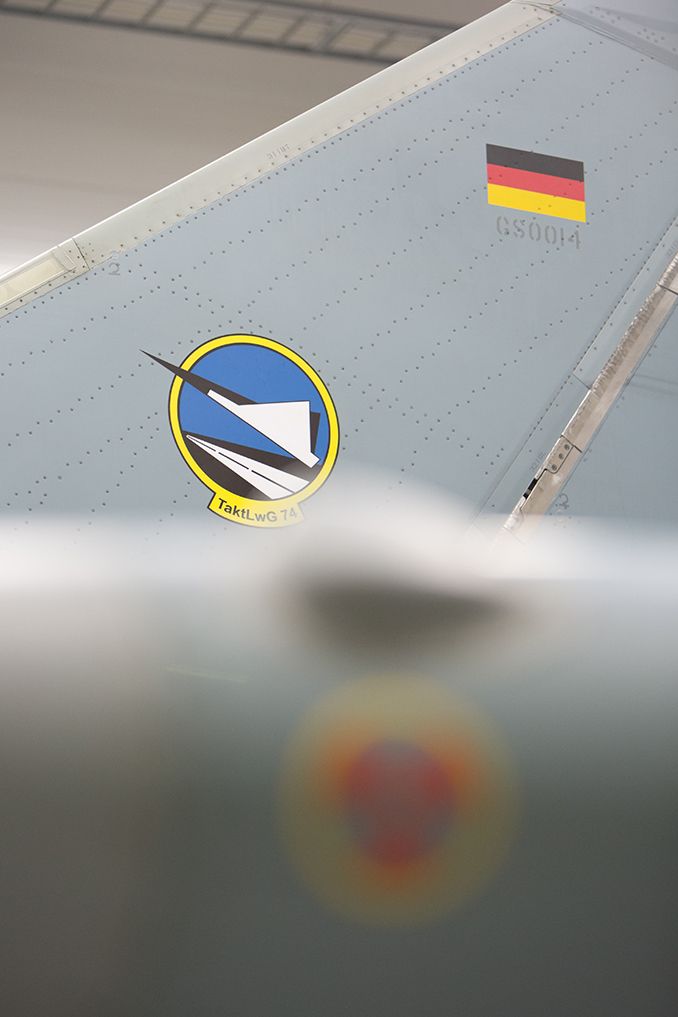