B.E. Meyers & Co., Inc. will be exhibiting at the Eurosatory Defense and Security International Exhibition in Paris, France, next week, 11-15 June 2018, in the USA Pavilion, hall 5A, at booth #C438. The company will be showcasing their advanced photonics technology, along with their great signature reduction and HBMG mounting solutions including:

With 41 years of experience and a proven track record, Meyers Optoelectronics Systems will work closely with customers to establish solutions. “We start by understanding your applications and objectives,” the company states. “From this we propose options and then work together to establish a set of requirements that defines your solution. Our engineers consistently produce unique components to meet size, weight, power, and price thresholds. Meyers Optoelectronics Systems applies the latest technology to support your idea from concept to finished product.”

Understanding the shortcomings of common laser devices in use with both military and law enforcement, B.E. Meyers built the MAWL with three ideal settings (Close Range, Mid Range, and Long Range) which allow for seamless transitions in any operational environment. The MAWL-DA (Direct Action, class 3B) and MAWL-C1+ (Class 1+) feature high powered near infrared and visible green aiming and illumination capabilities. The MAWL-CLAD (Covert Laser Aiming Device) distinguishes itself from other MAWL variants through the inclusion of a SWIR laser pointer. Every MAWL features cutting edge Vertical Cavity Surface Emitting Laser (VCSEL) technology to provide consistently superior NIR beam quality and clarity, as well as a significantly greater illumination range.

According to Matthew Meyers, CEO of B.E. Meyers, the tactical lights and lasers market is witnessing a, “significant resurgence,” globally. As he explained to MONCh, “SOF as well as most conventional combat elements that are equipped with laser and light devices are discovering that the majority of their systems have remained technologically unchanged since just after the beginning of Operation Iraqi Freedom [2003]. It doesn’t seem like that long ago, but the last time visual augmentation systems capabilities evolved specific to lasers, was 14 years ago. When we introduced our Modular Advanced Weapon Laser [MAWL-DA] to the end-user and showed them the next generation Vertical-Cavity, Surface-Emitting Laser (VCSEL) capabilities, this sparked the evolution that we are seeing in the market today.”

MAWL-DA is designed to address the so-called “ergonomic shortcomings” of laser devices on short-barrelled carbines, including USSOCOM’s MK18, with a mounting system offset from the rail adaptor system (RAS) of the rifle to, “…minimise impact on hand position and optic field of view.” As company literature explains, “shooting with a laser should feel the same as shooting without one.”

The IZLID series of NIR and SWIR laser pointers/illuminators are versatile and dependable. They allow Special Operations and conventional forces to clearly and precisely communicate with to other assets both in the sky, and on the battlefield. Primary applications include marking, pointing, targeting, and illumination. The IZLID series of lasers can be used as handheld units or mounted to various weapons systems or aircraft.

In response to the need for a modular, compact optic mount for the M2 platform, B.E. Meyers developed a revolutionary low profile mounting solution, the BOARS-M2. It offers a modular, quick-disconnect system with true return-to-zero reattach, and a pass through aperture for use with iron sights. The BOARS-M2’s low profile form factor increases operator survivability by lowering the end-user defilade.

As MONCh has reported from SHOT Show in January, B.E. Meyers released the M2A1F Flash Hider, developed in response to requests for a more durable flash suppression solution for the M2A1. Leveraging patented flash suppression design, the M2A1F preserves the great performance and durability that a shooter has come to expect from B.E. Meyers products. The M2A1F is made from a specifically selected alloy that has been heat treated to provide increased durability, and reliability over current competitive devices. Its left-hand thread pitch allows for quick and easy installation, and eliminates risk of separation from the barrel by self-tightening as shots are fired.

The M2A1F is a truly compact M2A1 flash hider. Measuring in at only 4.625in long, the M2A1F represents only a small increase in overall length of the weapon platform when compared to other legacy M2 variants, and does not negatively affect the cyclic rate of the short recoil M2 system. The M2A1F’s patented open-tine design is internally serrated to diminish visible signature in both day and night engagements. The effectiveness of the M2A1F’s flash suppression supports uninterrupted use with night vision devices, eliminating momentary blindness and flash distortion. 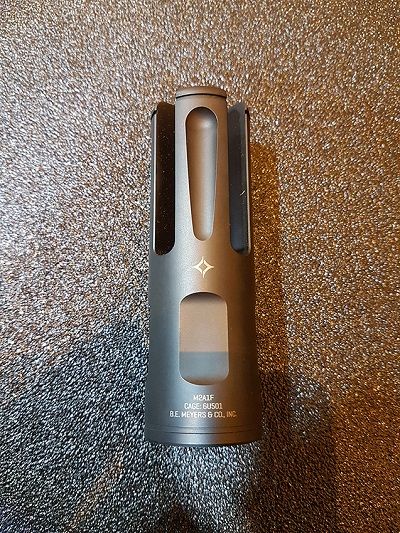