The deFNder and THeMIS are remotely operated, and the later equipped with an autonomy kit that allows the vehicle to drive with minimal operator assistance, i.e. between waypoints. A similar combined system was already deployed successfully  at the largest Estonian military exercise, “Spring Storm 2017,” and during a live firing demonstration in front of international military delegations last December.

The concept allows deploying an armed ground vehicle whilst ensuring operators are kept at a safe distance from combat and continue to make all the critical decisions.

The deFNder Medium on the THeMIS is also on display on FN Herstal booth at the upcoming EUROSATORY, featuring here the .50 cal FN M3R machine gun. In addition to the deFNder Medium, the deFNder Family of remote Weapon stations also includes the deFNder Light, accepting up to the 7.62x51mm FN MAG machine gun, for land applications and the Sea deFNder for naval applications. All deFNder RWS are designed around a modular, upgradable and adaptive architecture and can be integrated onto mobile or static platforms to provide critical infrastructure protection or static perimeter defense to name just a few. 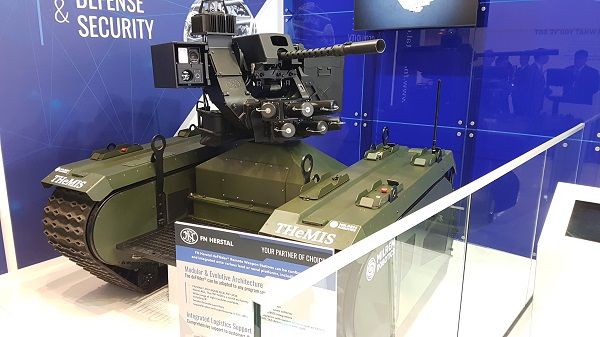