The Enemy of My Enemy is My Friend

“Convergenze parallele” (Parallel Convergences) – an Italian expression invented in the 1970s to define a strategy to build a political alliance between the ruling pro-West Christian Democrats and the opposition Communist Parties. The oxymoron was a compelling way to depict the inherent contradiction of collaboration between two entities with entirely different ideological values, but convergent interests.

Today, the new EU-US relationship reflects the expression, to some extent. Reality, however, is precisely the opposite.

Brussels and Washington find the raison d’être of their rapprochement in their support for democratic values – and they converge on general principles – but, as shown at the EU-US meeting in Brussels last week, interests might not necessarily be the same.

The deal over the Airbus-Boeing state-subsidy dispute, struck during the the summit, ended very expensive litigation dating back to 2004. As part of it, punitive tariffs are suspended for five years, and a working group is established to reach an agreement on subsidies.

The deal also responds to the need to protect both EU and US aviation sectors from China, whose industry is trying to break the Boeing 737/Airbus 320 duopoly with the new COMAC C919 airliner, supported with massive state funding – much greater than those received by Airbus and Boeing.

“Instead of fighting with one of our closest allies, we are finally coming together against a common threat,” commented US Trade Representative, Katherine Tai, summarizing the strategy behind the deal.

However, the EU is still reluctant to use the same anti-Chinese rhetoric as Washington: its leaders did not even mention China in their final declarations, and in the EU-US joint statement, mention of it is made only at point 26, which is focused on several different issues. In addition, one might wonder if the US-EU air truce is more of an armistice than a ceasefire, given the fact that the tariff war lasted almost twenty years,

Similar questions arise regarding another topic – the tariffs on steel and aluminium imposed by Trump. For now, the taxes remain in place, but the parties will try to find a solution by the end of the year. Needless to say, Biden‘s internal agenda – plus US industry and the unions – who had submitted a written request that tariffs be maintained – may pose a serious obstacle.

Another significant result of the meeting was the EU-US Trade and Technology Council (TTC). Its aim is to coordinate and strengthen cooperation on technology and supply chains, to promote innovation, support research, develop international standards and facilitate regulation.

A strong focus is placed on the global supply of semiconductors, which have a crucial role in new technologies, civilian and military. Washington and Brussels want to reduce their dependence on other countries, located mainly in the Pacific Rim, amid a global shortage of semiconductors that penalises European and US companies.

Another key issue for the TTC will be the promotion of joint standards on emerging technologies and better digital world regulation, an issue of concern to big tech firms.

It is unclear what will happen when competition on semiconductors arises between the US and Europe. Similarly, when it comes to regulation, it might not be easy to forget the many antitrust investigations against US IT giants launched by Brussels, and the angry reactions from US officials. 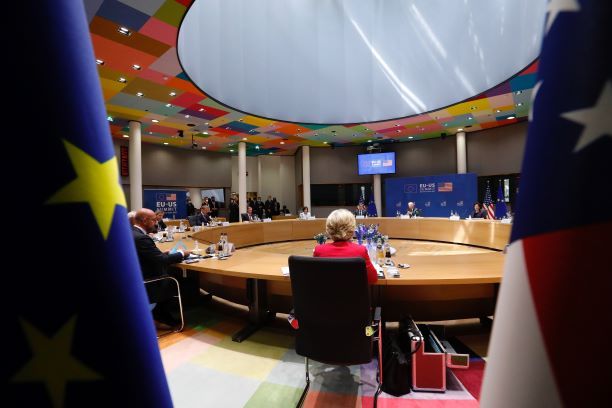 The Council of the European Union’s EU-US Summit (Photo: EU)