EU Urges China Not to Interfere With Sanctions

If Beijing cannot support Western sanctions against Russia, it should at least not interfere. This was the main EU request to China during the virtual meeting the two had on 1 April. A meeting held in a tense atmosphere, which saw Council and Commission Presidents Charles Michel and Ursula von der Leyen discussing with China’s Prime Minister Li Keqiang and President Xi Jinping the ongoing war and a number of other subjects.

Speaking with journalists, European leaders defined the talks as “open and frank” – an expression that, in Brussels jargon, means a substantial disagreement between the parties. Indeed, long gone are the days of the December 2020 EU-China Comprehensive Agreement on Investment (CAI), the deal that perhaps marked the highest point of the Beijing-Brussels relations.

“Today’s summit is not business as usual because this is a war-time summit,” declared Michel at the press conference. The “European Union’s top priority,” EU leaders said, is to stop the war “as soon as possible;” a war that affects not only Europe, but the whole world.

To this end, Brussels called on China to assume its share of responsibility in supporting peace. Above all, however, EU leaders sought assurances from China that it will not support Russia with arms, nor help Moscow circumvent Western sanctions. Such moves, the Commission President said, would lead to “damage [to China’s] international reputation,” and would jeopardise its relations with the EU, leading to an exodus of international companies from the country, as is happening in Russia. A week ago, during his European tour, US President Joe Biden declared that he had made similar warnings to Xi Jinping in a phone call.

Commenting on Chinese reactions to EU requests, von der Leyen said, “We expect China, if not supporting the sanctions, to do everything not to interfere in any kind“. It is unclear, however, exactly what China will do. China’s Prime Minister reportedly declared that Beijing would push for peace in “its own way,” while Xi Jinping expressed hopes that the EU would treat China “independently” – alluding to the EU’s close identification with the United States.

Contrary to how it apparently wishes to be seen, China is not neutral at all. Specifically, there has been no U-turn from the “no-limits” strategic cooperation announced by Beijing in January. The country opposes Western sanctions and considers NATO the “culprit [and] leading instigator” of the Ukraine crisis – as Foreign Ministry spokesperson Zhao Lijian’s said on 1 April – as well as representing a danger to its interests in the Pacific.

Yet, the country has more than one reason to fear substantial repercussions for its economy. Along with the US, the EU is China’s most important economic partner. In 2021, Brussels-Beijing trade amounted to €1.9 billion per day. Moreover, the country’s economy is already being severely tested by resurgent COVID and some initial capital flows. In addition, China is seeing the impact of the Ukrainian war on Russia. All these factors might push China away from attempting any dangerous moves.

At the summit, other tricky issues were also addressed, like Beijing’s sanctions against Lithuania and MEPs, as well as the eternal debate over human rights in China. Amid disagreements, leaders were also able to find common ground on subjects of shared interest, such as COVID and the environment. 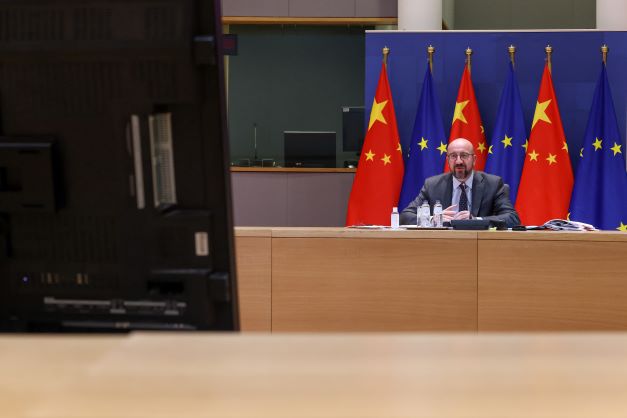