As Russia’s offensive into Ukraine intensifies, the EU seeks methods to rapidly provide lethal weapons and additional strategic support to the beleaguered nation.

On 28 February, EU Defence ministers decided to create a clearing house to coordinate Ukrainians requests for weapons and offers from member states. They also agreed to mobilise the EU satellite Centre in Madrid to address Ukrainian requests for geospatial intelligence. These decisions come a day after EU Foreign Ministers, in an unprecedented – and historic – move, agreed to provide €450 million in lethal weapons and million in non-lethal supplies to Ukrainian forces.

“Another taboo has fallen, [that] the European Union cannot use their resources to provide arms to a country which has been invaded,” was the comment of High Representative Josep Borrell on 27 February. “This is the first time in the history that we will be doing that. […] We want to keep peace in Europe, but we have to be prepared to defend this peace.” In other words: si vis pacem para bellum [if you would have peace – prepare for war].

Ministers decided to fund supplies through the European Peace Facility, an off-budget EU instrument established in July 2021, that allows the EU to support partners ‘armies with a number of assets, including military hardware.

Poland was chosen as a logistics hub for transferring the material through Ukrainian borders, which will not only include munitions but also fighter jets, missiles and other assets, still to be defined. However, Borrell did not disclose any further details about the ‘hows’ of weapon delivery, amid concerns over Russian potential action.

And on 27 February, another long-standing taboo was broken. Following the example of several member states, and after being heavily criticised for refusing to send them by Kyiv’s government, German Chancellor Olaf Scholz announced that Berlin will send weapons to Ukraine. As if this was not enough, Germany also pledged to raise its defence spending to 2%, an increase that NATO has asked Germany to implement for decades – to no avail.

These measures are not limited to military issues. The Council also agreed to close EU airspace to Russia, and took additional relevant financial steps. In particular, half the resources of the Russian Central Bank will be frozen (while the other half is deposited in third-party countries).

Additionally, after the bottleneck of the last few days due to some members states’ opposition, Foreign Ministers finally blocked several Russian banks’ access to the international SWIFT financial system. To a journalist’s question of why only some Russian banks have lost access, Borrell replied that disconnecting the financial system of a country strongly interrelated with others cannot be done “with the scissors overnight.” He then recalled the Iranian example, emphasising, however, that the current disconnection is “carefully calibrated to create maximum damage to the financial system of Russia.”

Finally, Brussels also decided to ban Russian media accused of information manipulation, including Russia Today and Sputnik. “We need to be vigilant about an obvious manipulation because Putin grants not only to conquer space but to conquer the minds,” Borrell concluded. 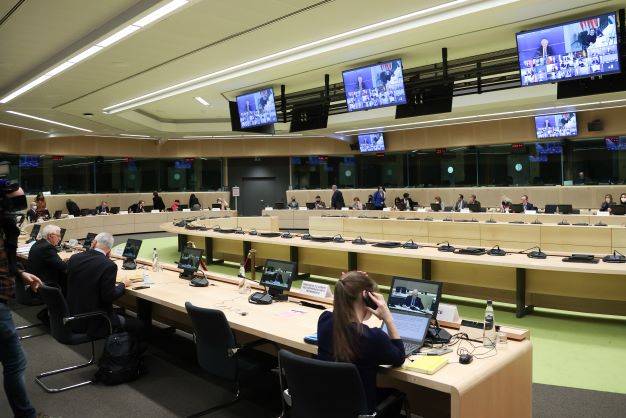 The informal video conference of Foreign Ministers discussing aid to Ukraine. (Council of the EU)