EU Adds Pressure on Russia and Strengthens Self

The EU’s triple action – to weaken Russia, support Ukraine, and strengthen itself – continues. At the extraordinary European Council on 30 and 31 May, leaders approved the sixth package of sanctions, which includes a progressive phasing-out of Russian oil, decided on fresh aid to Ukraine and endorsed the Commission’s project to strengthen the ‘Old Continent’s’ defence.

The package, blocked by dependent-on-Russian-oil Hungary for weeks, covers Russian oil delivered from the sea, allowing Budapest to keep access to its Druzhba pipeline. The measure is progressive: it will go from an immediate 75% reduction in Russian oil to 90% in about eight months. Caution prevails, therefore, to allow most oil-dependent countries time to adjust their needs. Nevertheless, this is “an extremely important step forward to put more pressure on the Kremlin,” as Council President, Charles Michel, noted.

To manage the consequences of phasing-out Russian supplies, leaders insisted on the importance of the RepowerEU plan. They are currently exploring the possibility of import price caps, while insisting on the urgency for diversification and joint purchasing where possible, widening the interconnection of European gas and electricity networks, and investing in renewables – something crucial not only for the climate, but “also good for our independence,” as European Commission President, Ursula von der Leyen, stated.

Meanwhile, the EU decided to grant Ukraine €9 billion ($9.7 billion) in exceptional microfinance assistance. However, on its status as candidate to join the EU, the road still seems long. As Italian premier Mario Draghi explained during his post-meeting press conference, “the perspective is opposed by almost all the major states of the European Union,” besides Italy.

Leaders also spoke extensively about food security, one of the more dangerous side-effects of the Ukrainian war, as Russia is blocking Ukrainian Black Sea ports while 20 million tonnes of wheat are stuck in Ukraine. To avert the risk of a potentially catastrophic global supply crisis, especially in Africa, the idea is to export it “via different land routes“, while talks with the UN are under way to find solutions.

Besides humanitarian concerns, the issue is deeply geopolitical, not only as to implications for potential new massive migration, but also as a catastrophic food crisis would increase the anti-Western sentiment of affected countries for a long time – a trend already seen in the various international fora.

Leaders also addressed defence, by supporting the idea of creating an (evolving) instrument to encourage joint procurement by member states, recently proposed by the Commission as part of the discussion on how to address the EU’s defence gaps.

In the first place, the objective is to replenish member states’ stocks and, in the longer term, to address fragmentation, overcapacity and lack of standardisation. But also to ensure reciprocity with countries exporting in Europe – as the EU imports 60% of its weapons from outside.

As anticipated by the EU executive, the instrument will be financed with €500 million in EU funding, while the consortia should include at least three member states. Leaders also gave their green light to exploring value-added tax exemption options and developing EU strategic defence planning and further measures to map EU manufacturing capabilities and strengthen the defence industrial and technological sector. Meanwhile, on the same day, the EDA was holding its ‘Innovation Day’ as part of the launch of the HEDI (Hub for European defence Innovation). 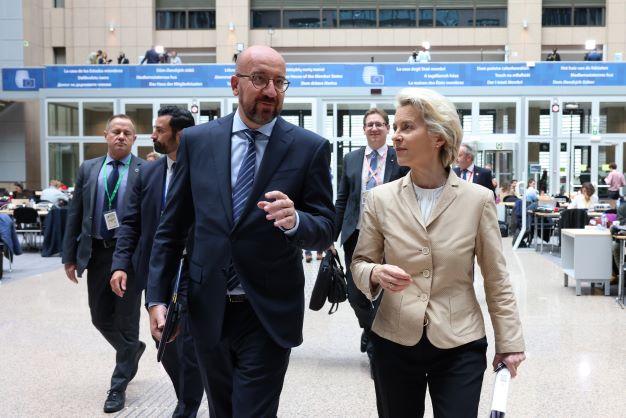