Within the framework of the forum “Unmanned Systems” of the Studiengesellschaft DWT, ESG Elektroniksystem- und Logistik-GmbH and Quantum-Systems GmbH on 4 June presented two new unmanned aerial systems (UAS): VECTOR and SCORPION. The companies call these, “real world novelties in the field of electrically operated, unmanned systems for tactical deployment scenarios.”

VECTOR combines the performance advantages of a fixed-wing aircraft with the vertical take-off capability of a helicopter. In just a few simple steps, one can switch to the SCORPION configuration and use the benefits of a sophisticated tri-copter setup thanks to the 2in1 system.

This allows a fast and highly flexible response to different challenges of changing deployment scenarios. “Due to their design, VECTOR and SCORPION are ideal for tactical reconnaissance and surveillance missions even in demanding weather conditions,” the companies say.  Both systems share the following specifications:

The mathematical definition of a vector fits very well for the latest UAV from Quantum-Systems. It can point into any direction: upward, forward or down. That’s exactly what the latest UAV from Quantum-Systems is capable to do. Vertical take-off. Energy efficient long range fixed wing flight and back to a vertical landing. All automatic no pilot or operator input needed. Just fly. “VECTOR – The 2in1 vertical take-off reconnaissance UAV”
Flexible and enduring, VECTOR provides flight and surveillance characteristics to military and security forces that are exceeding performance of current tactical UAV platforms in service all over the world. It is a military grade UAV System built to last and bring capabilities to the battlefield not available as of today. A military encrypted mesh IP link sends video streams up to 15+ km range. A flight time of up to 120 minutes speaks for itself.

It is not only the optics that SCORPION has in common with its animal fellow. Like the Vector it is also optimized for use in adverse conditions with extreme temperatures. The centerpiece is identical to the fixed-wing Vector UAV housing gimbal, autopilot and data link. The larger propellers and motors of SCORPION make it a state-of-the-art tri-copter with live video data link for various mission scenarios.

SCORPION impresses with an HD data link of up to 15+ km range. As a tri-copter it is ideal for smaller-scale and stationary use, for example in densely built-up areas. With a flight time of up to 45 minutes, it can cover a wide range of applications. Coming with the built in 2in1 ability to always convert back to the VECTOR UAV the SCORPION’s core features are: 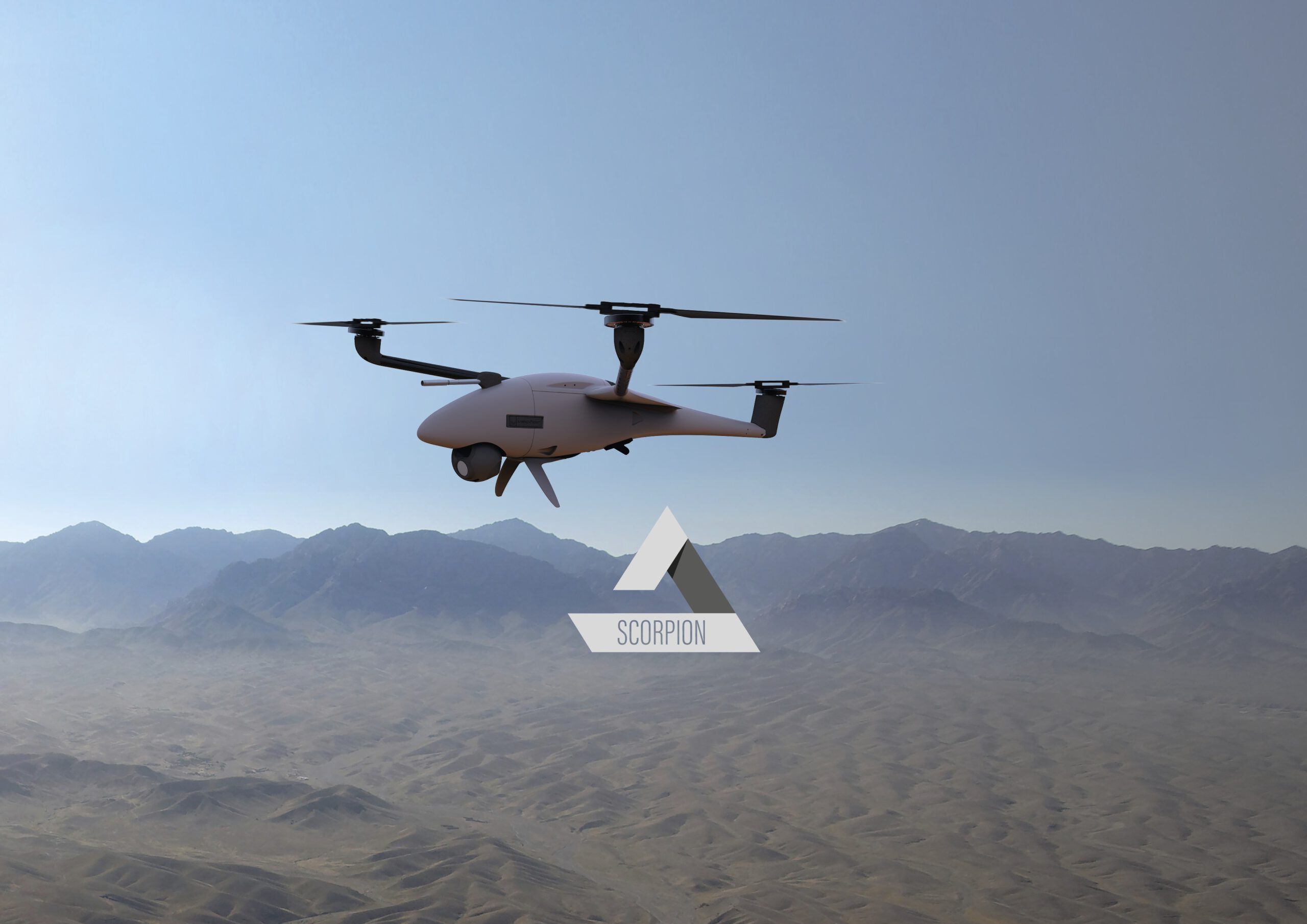