ESG Electroniksystem- und Logistik-GmbH has developed a type of advanced laser safety glasses for military pilots, and has received an order for series production from the Bundeswehr.

The new glasses were developed in collaboration with the German Institute of Aerospace Medicine, the Bundeswehr Technical Center for Aircraft and Aeronautical Equipment, and Helicopter Command’s Operational Test Group, KHT. They are currently undergoing a final test phase ahead of planned delivery of the first units, for crews of the KH TIGER combat helicopter, which is scheduled for the end of the second quarter of 2022. Procurement of the glasses for crews of other types is “currently being examined“, ESG says, while the company is also monitoring changes to laser-pointer technology and plans to offer continuous modification to existing glasses, should protection need to be altered or upgraded.

The use of laser pointers to blind pilots, particularly during approach phases at airports, has become a growing threat to both commercial and military aviation in recent years. The pointers, which have legitimate uses in other contexts, are widely available and inexpensive, but when shone at a pilot in the cockpit of an airborne platform, could result in life-threatening situations. Flights are particularly vulnerable when nearer the ground, so helicopter pilots, who generally operate at lower altitudes, are in greater need of protection.

ESG says that, prior to their new development, most laser safety glasses protect only against “one or two wavelengths and display a strongly color falsified image, which severely restricts their use in the cockpit,” or which may even prohibit their use altogether. They are also able to only admit a limited amount of light to reach the wearer’s eye, so are unsuitable for flying in poor visibility or twilight. Additionally, they have not been designed to be used with the type of helmet typically worn by a pilot, or to be operated in conjunction with night-vision systems. 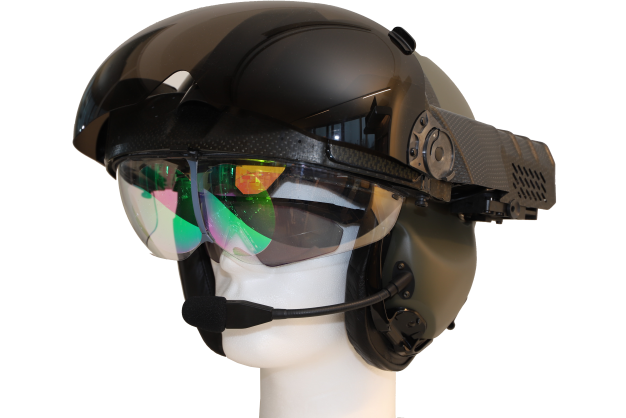