The project – known as AlmEG (Reconnaissance and Identification in the Maritime Operational Area) – will see ESG leading a programme to integrate the aircraft and control stations, train crews and certify the systems for operational use. It is structured in two phases – pilot and series production. The pilot phase will develop the adaptations and certify the system, deliver one system (defined as two air vehicles, an integrated ground-control station on the corvette, all necessary support equipment, and spare parts), and carry out initial training. The production phase will deliver a further two systems, one of which will be integrated onto a corvette while the other will be used for land-based training.

The aircraft selected is the Skeldar V-200, manufactured by Swedish firm UMS Skeldar AB, to be operated under the name SEA FALCON by the Bundeswehr. The aircraft has a five-hour endurance with a maximum take-off weight of 235kg, and is capable of automatically taking off and landing on the corvette deck in up to 20kts of wind and at up to sea state 3. The aircraft will carry infra-red and optical sensors, which will transmit data in real time to the control station. 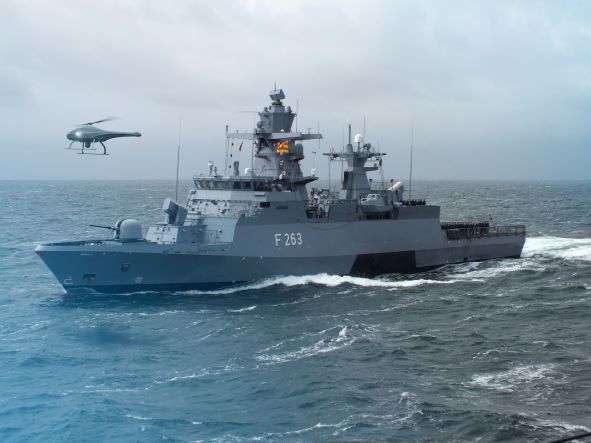 The SEA FALCON programme will give the Bundeswehr's corvettes an aerial reconnaissance option. (Photo: ESG)